Buzz-Off is one of my three top favorite Heroic Masters from the original He-Man line. He's an awesome looking humanoid bee. Buzz-Offi is a creative re-use of many old parts.His legs and torso come from Whiplash, and one of his arms comes from Clawful. I love how the torso looks painted up like a bee's stripes. Mattel sculpted a second arm and a new head to make the figure. Buzz-Off has four accessories. He comes with two semi-transparent yellow wings, a brown axe, and a helmet. 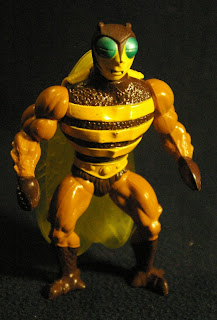 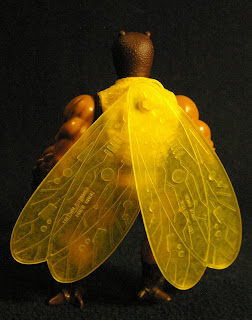 The large wingspan really helped make this figure seem like he could fly compared to other characters like Stratos who just had feathers on his arms. Buzz-Off's big bug eyes look really good painted in an almost metallic green paint. I even have a cool Cel from the original Filmation Cartoon framed in my house featuring Buzz-Off.