The Jawas were one of my favorite aliens from the original Star Wars film. When I saw the figure I had to have a bunch. I'm young enough that I missed them in stores. Like my entire vintage collection, all my Jawas were bought second hand. I didn't even know they came with capes as a kid.

Based on the way they are sculpted the Jawa figure doesn't need a vinyl or cloth cape. Originally, and for only a short time, the Jawas came with vinyl capes like Darth Vader came with. Then they were quickly switched over to the cloth cape that hid their cool details. 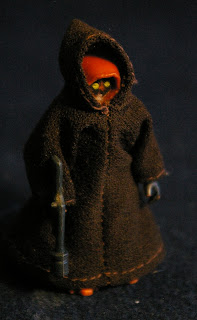 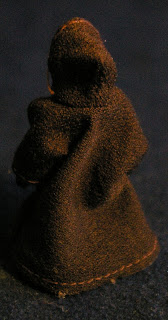 In addition to the capes the Jawa also came with a unique blaster. Many figures from the vintage Star Wars line shared guns. But the Jawas in the movie had those cool guns that they used to zap R2-D2. 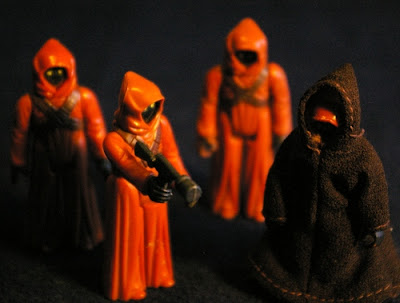 As a kid, to help bolster the ranks of my Jawas I would use the robe as a figure. The robe is stiff enough that it can stand on it's own. The Jawas have a great scene in the 2nd episode of Action Figure Adventures. If you haven't checked out my stop motion animated show before you might get a kick out of this clip.
Posted by Buzz Chuck at 9:03 PM