Serpentor the Cobra Emperor was a great figure and a cool character created by Hasbro, who then had to be shoehorned into the comic and cartoon stories. Both handled his well, but it was awkward having a new character who was the leader above the original leader, Cobra Commander.

I still remember being in first grade and we had to draw what we wanted for Christmas. This kid near me drew a funky drawing of Serpentor and his Air Chariot. Later in the school year I would become best friends with that kid. If you've read anything on the blog where I mention my buddy Derek or see his name in any of the Animation Creation and Action Figure Adventures credits... he knew a cool toy when he saw one even in first grade. I didn't think he'd get Serpentor because this is 1988 almost 1989, but his parents found one on the shelves somewhere. (This brings up something I want to talk about in a future post about how toy marketing has changed with waves of products vs years) 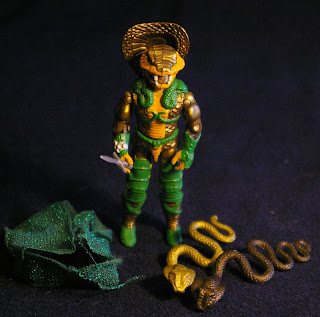 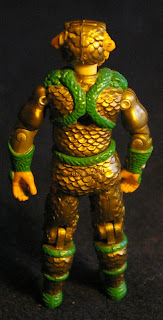 Serpentor is really a vehicle pilot. He came with the Air Chariot as well as a bunch of great accessories. He has a cool cobra backpack/hood, a green sparkly cape (mine is ripped), a silver knife, and a golden snake. There are several variations to the color of the snake. His entire outfit is a really cool gold, yellow, and green snake motif armor. His snake head helmet being the coolest part.

As a kid one time, my original Serpentor's helmet cracked off his head while another one of my buddies was playing with him. (If you want to read about this or other GI Joe horror stories from my childhood check out this older article) I was devastated. He was such a cool figure and was so ugly afterwards. I've never seen another one without his helmet, but I see lots with broken fangs.

A buddy of mine named Paul (who is a toy and video game reseller - his video game show, Too Many Games, is this weekend.) gave me a Serpentor who has a broken fang and a broken arm just so I could crack his helmet off to show people. After I removed the helmet I glued it back together and filed off the fangs. 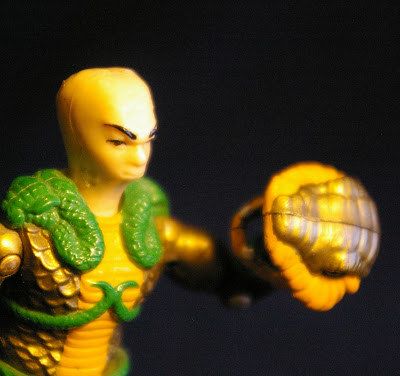 He really is ugly. He's got the big bald head with bushy eyebrows like Darth Vader under that thing. The top of his head is very square and he has no chin. It's just freaky. Clearly they didn't plan on the helmet coming off when they glued it on in the factory. There is also a variation of Serpentor where his neck is painted yellow. I've owned at least 4 of him in my life, (and seen dozens go through Paul's business) and I have yet to see the yellow neck version in person. Something for me to keep my eyes out for at the flea markets I guess. 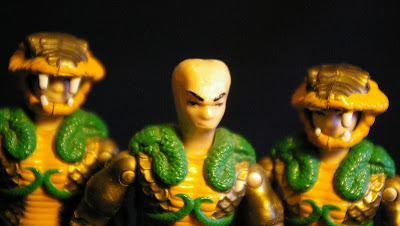