Luckily the rain held off this morning and I was able to hit up one of my favorite flea markets. I bought one figure for $2. Then while looking at some figures in a box a dealer offered me the box for $20. I wasn't interested in everything is the box, but it still worked out to be a pretty good deal. It worked out to be $1 a piece on the figures plus lots of accessories buried in the bottom of the box. 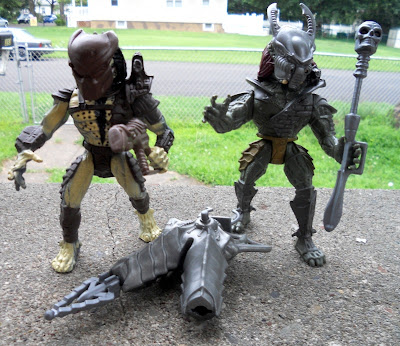 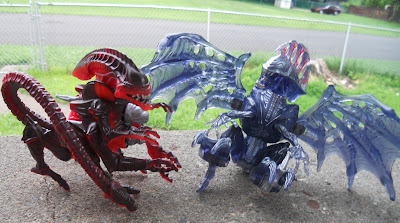 As a kid I really enjoyed the Kenner Aliens toy line. Again my buddy Derek had almost all of them. I've been planning on doing a stop motion animation using some of the Aliens toys in the future. The toys that drew my attention to this box were the Aliens. The Killer Crab Alien with both of his chest missiles and the Flying Queen Alien. 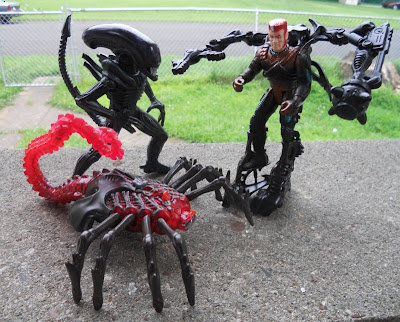 I've been wanting to get one (or more) of the Warrior Alien from the Alien vs Predator 2-Pack for a long time. I also got the Face Hugger Queen and Atax with some of his Alien Armor. 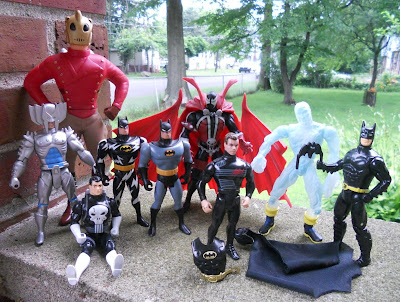 The box lot contained several super hero figures. The Rocketeer is a large rubbery figure. Strife from Toy-Biz X-Force line with is mask. A Punisher figure with a wonky foot. Three different Batman figures and a Quick Change Bruce Wayne with chest armor and Cowl/Cape. I'm not sure if the Spawn figure actually goes to that cape, but it displays nicely. I also bought individually (as previously mentioned) and Iceman figure. He's my favorite X-Men character. Oddly he has a snow ball molded into one hand and an ice chuck in the other. 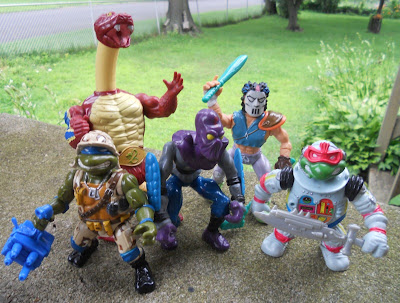 The box also contained Rattlor from MOTU and a couple of TMNT figures. I'm excited to have another Foot Soldier. I don't collect "variant" Turtles and I already have Casey Jones. I did play with that Astronaut Raphael in the swimming pool a lot as a kid. 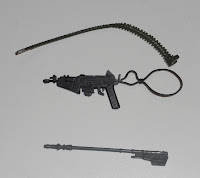 I didn't look at the accessories in the bottom of the box to much before buying the lot. I just sort of crossed my fingers that I would find some good stuff. I was super excited to find Bullit's Ammo Belt and Gun from the Cops 'n' Crooks line. I've been working on building up that collection so I can post about them on AFA. I was also very excited to find a vintage Star Wars weapon. As a kid I never had many original weapons because all my Star Wars figures came from yard sales. I still get excited when I find them. 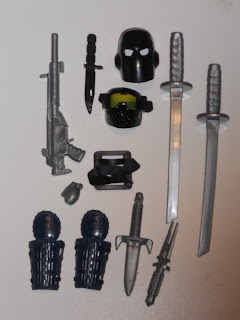 I found quite a few accessories from 90's 12" GI Joe figures. There is a mask for Snake-Eyes and Red Ninja Gear. Destro's Dagger and several other items are there. I don't own any of these figures, but I do see them from time to time. Now that I have some parts to them maybe I'll pick one up.


I do have a 12" Snake-Eyes and Storm Shadow that came in a two pack called Ninja Showdown in the early 2000's.


Below are all the remaining weapons and parts. Some of them I know, and others I need some help identifying. Please comment on this post if you know some of them. I'll update the post as I find out what things go to. Feel free to let me know if you need any of them. If it's not something I need for my collection I'd be happy to part with it. 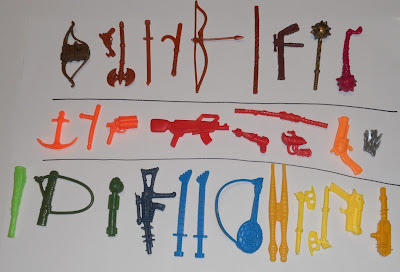 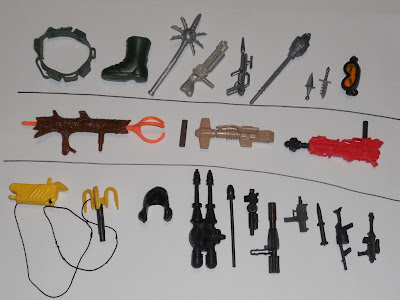