This Gambit figure comes from the X-Men Classics line by Toy Biz. Each figure in this line featured light up weapons. As a kid I had the original Gambit figure with the crappy plastic coat and sculpted on collar. When I saw this figure I just felt like he blew the other figure away. He was originally released in 1996. Gambit came with a silver staff and a magenta light up energy effect with some playing cards embedded in it. I bought this figure at a yard sale years after I have sold off most of my X-Men figures. He just looked so cool. He's buff and his coat looks great. This is the way Gambit looked in the comics. When I bought this Gambit he didn't come with any of his actual accessories. I gave him this piece of a boom box antenna to use as his staff. Gambit was one of two X-Men figures I picked out to be used in Action Figure Adventures: the Series. My buddy Derek who wrote the script for all 8 episodes isn't a huge X-Men fan and I feel that they weren't used to their full potential in the show. Gambit is involved with a pretty funny escape plan. Check out his scene in AFA here. 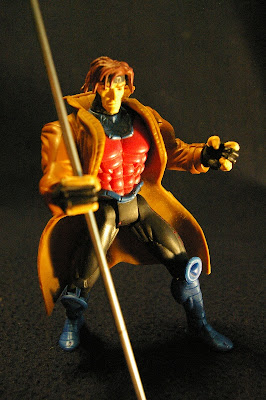