Helen Bennett is the mom from the 80's cartoon / toy line Bionic 6. On the team her call sign is Mother-1. Bionic 6 was a toy line produced by LJN in 1986. There were 13 figures and some vehicles and a playset. The unique thing about Bionic 6 figures is that they are made mostly out of die cast metal with a few plastic parts. Due to being made out of cast metal it hard to find loose figures with nice paint. 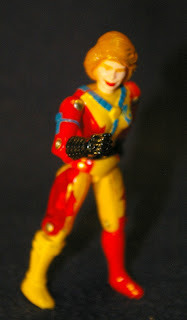 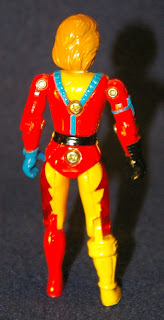 I picked up Helen at the Wayne NJ Toy Show. I bought her from Steve from Toy Hunter. He had a big bin of loose figures that I was digging though. There were a couple figures I was interested in, but for loose incomplete figures I felt like he was kind of asking to much. So Helen ended up being my only purchase from his bin of figures.

Originally Helen came with a blue backpack. It sort of clips over her shoulders and then there is a strap that goes around her waist. She didn't come with it, but I previously bought a complete set of Bionic 6 weapons on ebay. Even though the auction didn't mention it, I am 99% sure that the weapons I picked up were reproductions. The more rubbery accessories like Helen's backpack just aren't quite flexible enough. It's really hard to attach the belt. I have an original Meg (the daughter) belt as well as the one that came in the set I bought online and they aren't the same material. 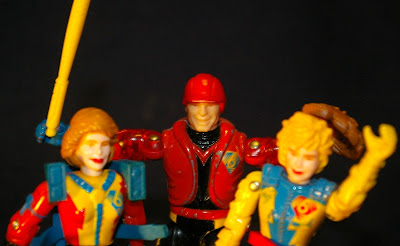 Check out this awesome 80's commercial for the Bionic 6 toy line. I always liked how the figures started out as metal in a mold in these ads. There is a little bit of stop motion animation in the ad also.

Email ThisBlogThis!Share to TwitterShare to FacebookShare to Pinterest
Labels: Bionic 6