Scrap Iron is an often forgotten agent of Cobra. His primary specialty is listed as Tank Destroyer. His file card also mentions he may work as a weapons designer and tester for Destro's weapon company. He's a less mobile version of Fast Draw and Metal-Head from later years in the line. Scrap Iron is dressed in a set of blue coveralls. He is wearing a red harness and protective vest over top. He has a non-removable black helmet with visor. Scrappy is not a bad figure at all. He even has a cool looking scar on the side of his face. I think one or two paint hits on his helmet would have made him really stand out. I'm not really sure what the symbol on his helmet is, but I would have liked to have seen it and perhaps his visor painted. He shares arms and feet with the GI Joe Airborne. It's rumored that some of his parts were originally going to be used to make a mountain climber figure which was pushed back a year. I've never seen anything in writing or per-production photos. The only proof anyone has ever offered as far as I know is that he looks like he is wearing a climbing harness and has climbing spikes on his one leg. I don't know, I think we'd have to ask the sculptor what those details were.

Scrap Iron come armed with a really cool looking pistol and a large missile launcher that was made up of several pieces. All his original accessories were black except for the missiles which were red. They were also all reissued in various colors in the vintage weapon packs. As you can see I have many weapon pack placeholders in my collection. I own every vintage figure, but I have a lot of work to do to own every vintage accessory. 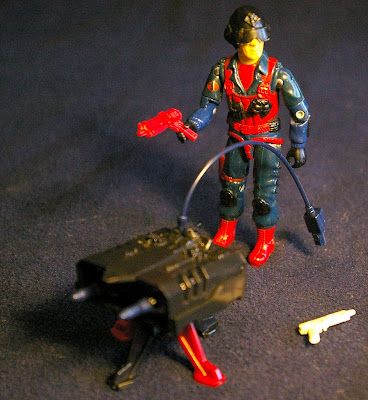