Happy 4th of July everyone. Happy Birthday 'Murica! I did my duty and eat stuff cooked on the grill and shot off fire works.

The flea market I like to go to in New Jersey on Sundays is also open on Thursday, but I never go then because I usually have work. My buddies that I always go with were all excited to check out what was for sale today since we all had off.

For a $1.50 I picked up the GI Joe VAMP Jeep and Tokka the evil snapping turtle mutant from Teenage Mutant Ninja Turtles. The VAMP is missing most of its accessories, but I enjoy collecting the '82 vehicles and I might have a spare laser cannon for the vamp laying around. Tokka is in great shape and a fun TMNT figure to add to my collection. I always like the Secret of the Ooze movie. 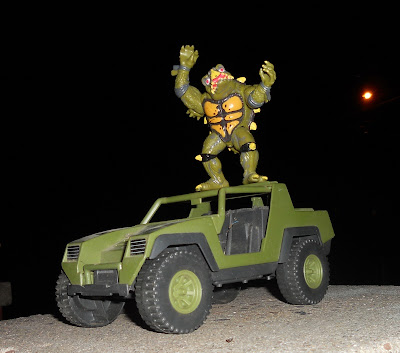 Some of my long time readers may know that I am a Middle School / High School Teacher 9 months out of the year. In addition to teaching I have two side jobs. During the fall I work at a Haunted Hay Ride and during the Summer I run a Work Crew at my school. Basically I supervise a team of 5 students who get paid to paint and do small repair projects around the school.

While flea marketing today I saw two cool Beatles items (not toys... oh my!). I had to pick them up for the one girl on my Summer Work Crew. She loves the Beatles and talks about wanting to collect all their records. She only has one so far. I bought her a copy of the Sgt. Pepper's Lonely Hearts Club Band LP. I always have felt that it is the coolest record to own on vinyl because of the awesome cover art that just isn't done justice when it is shrunk down to fit on an Ipod screen. I'm going to give her the record on Monday, but the second item I'm saving for her Birthday at the beginning of August. It's a book titled The Beatles an Illustrated Record. It was printed in the late 70's and through text and pictures tells the history of the band from formation to break up and includes information about all four band members solo projects up until its date of publication. 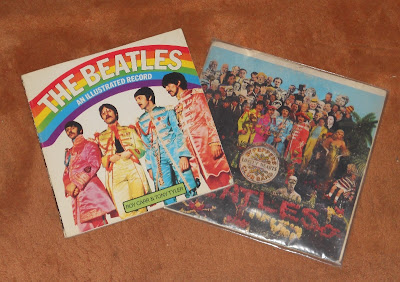