A couple people commented on this figure in my recent Flea Market Finds post so I decided to give him a full post. Over the weekend I picked up Bruce in a box lot with his Cape/Cowl and Chest Armor. I had him and all his gear already in my collection from when I was a kid. I've said it before and I'll say it again... I love the unmasked figures. Clark Kent, Bruce Wayne, Peter Parker... I wanted them all as a kid. I wanted this set more for Bruce than the ability to dress him up as Batman. I already had a standard movie Batman figure, but this was my standard Bruce. I used to like to have him pick up the armor in the Batcave.Then I'd just set this figure aside and pick up my '89 Batman. 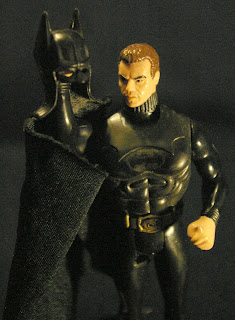 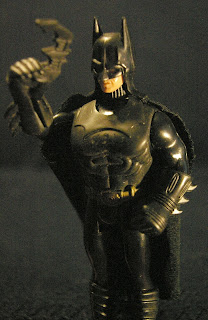 Like many of the Dress Up action figures the accessories are very clunky and over sized. This is generally the unfortunate downside to these types of accessories. Bruce comes with a Cape/Cowl, Chest Armor, Boots, Gloves, and a Radio. One of his gloves has a Batarang molded into it. I used to sometimes put the Cowl on Laser Viper from GI Joe. Even though he didn't have an exposed mouth and chin. I always thought he looked cool and it gave me a Batman toy with GI Joe level articulation. 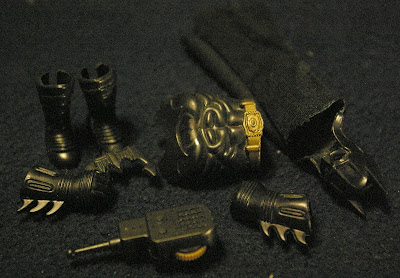 Bruce Wayne has a great head sculpt.For an early 90's figure he really looks like Michael Keaton. I always thought it was a bit odd that Bruce Wayne would be wearing a "Batman Sweat Suit". It would have been best for him to be dressed up a little, but since he also has to be Batman I can live with the style of the cloths. In the movie he did wear a black turtle neck while in the Batcave. I don't know why they felt the need to include the Bat Symbol. Did they think kids wouldn't know who he was otherwise? 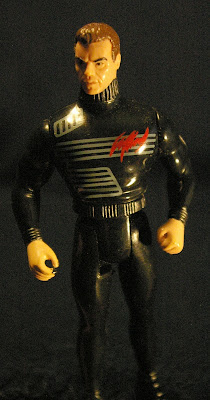