Moss Man was one of my top three favorite heroic figures from Masters of the Universe as a kid. He was a master of camouflage and came covered in green flocking. He was so unique and cool to me. In reality he was just a green Beastman figure covered in flock with a pine scent added to his plastic. I don't have a sense of smell so that feature was always lost on me. The flock hides a lot of the details of his sculpt, but I think that helps make him feel a little less recycled. As a young kid playing with these figures I already had Beastman and Stratos that shared the entire body as well as Zodac who had the same torso. 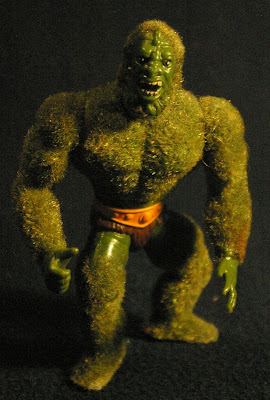 Moss Man came with a brown version of the mace that originally came with Castle Grayskull. Clawful also had that mace. I remember liking Moss Man in the vintage cartoon and a neighbor kid game me a promotional cup from Burger King that had a comic printed on it about Thunder Punch He-Man and Moss Man. I used to occasionally have to try to pick little bits of fuzz and lint out of his flocking to keep him looking nice. My original Moss Man was sold years ago, but I'm happy to have this replacement figure in my collection. 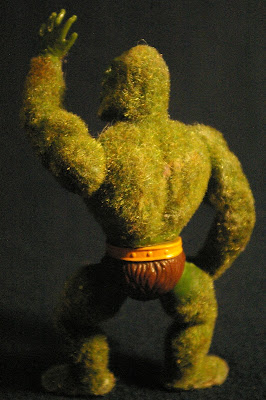 * Little Side Note about one of my other favorite MOTU Heroes. I was watching the the season two episode Scavenger Hunt of the Mighty Morphin' Power Rangers and when the team ahead of the kids from Angel Grove (The Rangers) dump their bag of Scavenger Hunt items a vintage Buzz-Off figure dumps out of the bag. He is missing his wings.
Posted by Buzz Chuck at 6:57 PM