So in addition to Helen from Bionic 6, I did pick up a few other toys. For $7 I picked up two vehicles from the COPS 'n' Crooks toy line. I have quite a few COPS figures and as a kid I played with lots of these toys because but buddy Derek's father wrote the COPS comics. Both vehicles are Crooks vehicles. The first is the Crooks Roadster. This green speed demon was always a favorite of mine as a kid. Derek had this and it was one of his favorites. My Roadster has a little wear on it's stickers and is missing the safe and silver bricks. It still looks good and will work in my collection for at least a while. 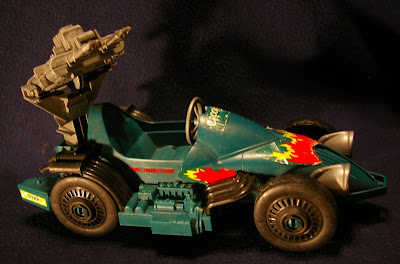 The second vehicle is the Jailbird Air Speeder. I used to love playing with this toy at Derek's house. The one I picked up in Wayne isn't complete, but it still displays nicely. My Jailbird doesn't have any stickers. It is also missing the handle bars and the silver part of the back rest. It has many small pieces that are often missing including the landing gear and little bombs from under the wings. 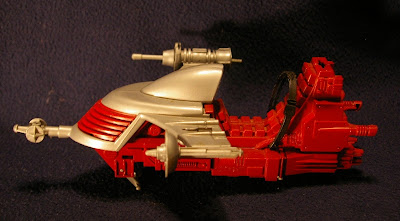 The final items I picked up are from the Kenner Ghostbusters line. I bought two broken Proton Packs for the Ghostbusters. I didn't quite realize how broken they were when I bought them. I knew the one was missing the proton stream, but I didn't notice the handles were bad on both guns. I thought these would be useful for displaying with my figures. I plan to glue the gun from the pack that doesn't have the steam. 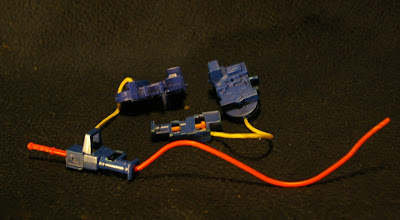