When the Mighty Morphin' Power Rangers hit the airwaves I loved the show. It was like Ultraman mixed with Voltron. I was a little too old for toys at the time (I guess I got younger since then) but I did have fun playing Power Ranger with my little cousins. They got just about all the toys (Rangers, Monsters, and Zords) that year for Christmas. At one point in time, while Power Rangers SPD was on the air a friend (who watched the show with little kids she babysat) and I came up with an idea for a spoof stop motion project called Power Rangers STD. The Rangers were all going to have porn star names and use their Zords to fight STDs. I went on Ebay and bought a bunch of the Auto Morhin figures to use for the animation project, but it never happened. 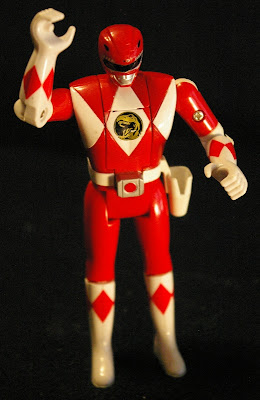 The Auto Morphin figures have special spring loaded torsos. There are flaps on the front and back of their torsos that open up and allow a piece with two heads to spin. One head is the  "Teenager with attitude" and the other is the Ranger helmet. The spring loaded feature only works when the Teen head is showing and it is activated by pressing the morpher on their belt. All the figures in the line share the same body sculpt. Their head is the only unique piece. They have decent articulation, 8-points, plus the action flipping head.

Jason came with two accessories. Like all the Rangers he came with a white power blaster that fit in the holster on his hip. He also came with a silver Power Sword. Both of the accessories are not pictured because I don't have them. 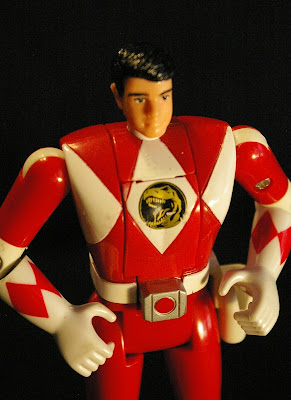 These Auto Morphin' Rangers were released by Bandai in 1993. Jason stands about 5 1/2" tall. The sculpt of the figure's teen face is a pretty good likeness to actor Austin St John. All around this is a fun toy. This figure even originally included a temporary tattoo for kids of the Tyrannosaurs Power Coin.

My only other real complaint I have is that the figure has his power coin printed on his chest. This was common with just about all of the 90's Power Ranger toys and much of the supporting product art work like coloring books and stickers. I just never liked it because it was not screen accurate.


Jason was my favorite Ranger as a kid until they introduced Tommy. It's kind of sad that he and two other actors left the show due to contract disputes. I never liked their replacements as much as the original Rangers. It's pretty cool that they did bring Jason back (at least for a cameo) a few times in the various reiterations of the Power Rangers since the Mighty Morphin days. Happy 20th Anniversary Power Rangers!
Posted by Buzz Chuck at 11:51 AM