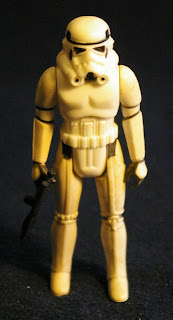 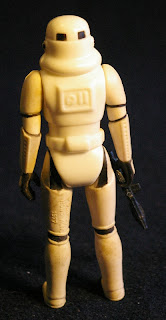 Imperial Stormtroopers came armed with a black blaster. Many aliens and bounty hunters also came with this weapon. As a kid I always had to arm my troopers with GI Joe guns. None of my "used" Star Wars figures came with accessories. The Stormtroopers really do have nice sculpts and still hold up well today even if they only have four points of articulation. 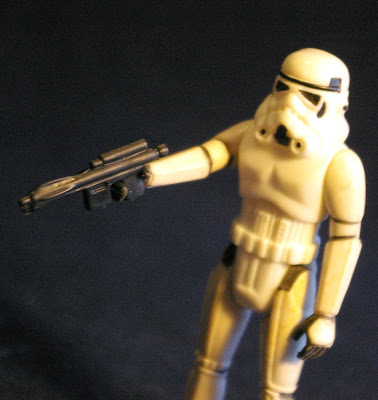 As a kid I was so jealous of my best friend Derek because he owned six Stormtroopers. He had such a great army. He also had a cool Stormtrooper that someone had custom painted black. We later learned about the Shadow Troopers from the Marvel comic. It took me a long time, but my army caught up to his. 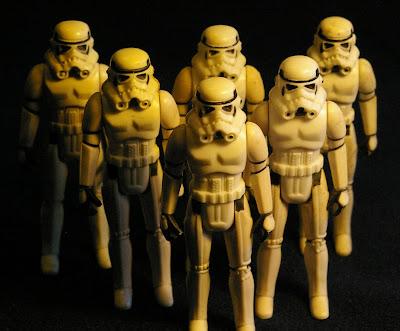 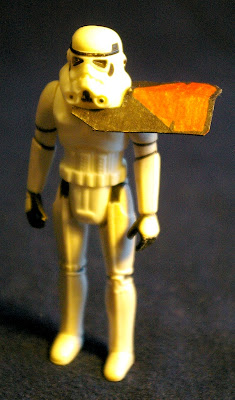 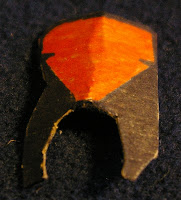 I always thought that the Sandtroopers were such cool variations of the standard trooper. I wanted a toy of these guys long before Kenner made the Power of the Force (2) version, so I made little custom shoulder pads. I made the shoulder pads out of cardboard and decorated it with orange and black marker. The pad is cut out so it sort of pinches around the Stormtrooper's neck. They worked out really well for a little accessory created by a 9 or 10 year old. The shoulder pads have been stored in the weapon compartment of my Star Wars Collector Case all these years.