Sir Laser-Lot was one of the new characters created for the 30th Anniversary of Master of the Universe. Mattel reached out to several writers/creators to see if they would create a new Masters character, but they weren't offering any compensation (other than maybe a few free figures). Jeff Johns of DC Comic fame was the only celebrity person to take them up on their offer. Sir Laser-Lot was his creation. The back story is that this knight from the ancient days had a suit of magical armor powered by the gem on his torso and could create energy weapons. When He-Man is old (and the king) he sends The Mighty Spector (another 30th Ann,. character - created by the Master Brand Manager) back in time to bring him to the present (aka the future) to train his son and army in the ways of ancient combat. 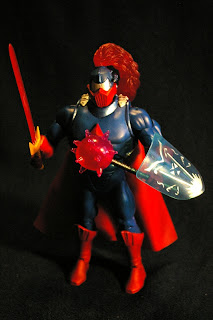 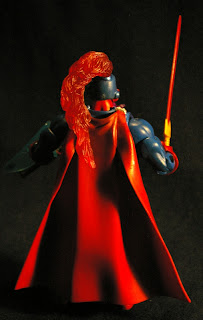 I'm not a huge fan of the time travel element and he doesn't look quite old fashion enough for me to be from Preternia. Oh well, he's a nice over all figure. Sir Laser-Lot is basically entirely blue and red. Many fans have complained that he is a little plain and I have to agree. Maybe a few more silver details would have done the trick. His helmet sculpt is just awesome and the translucent plum coming out of the top looks cool. His cape curls back nicely also. Laser-lot comes with three weapons. They are all made of translucent plastic because they are the energy weapons he can create. He came with a Sword, Mace, and Shield. All three of these weapons are going to be released in more traditional colors in the next weapons pack from Mattel. I think the one other little detail that could have made this guys even better is if the gem on his armor was also cast in a translucent plastic. 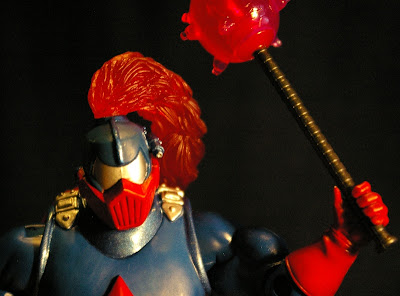