The Bug-Eye Ghost is my favorite ghost toy from Kenner's Real Ghostbusters line. He was large and reasonably scary. This purple beast with long outstretched arms and three eyes making him a great villain. His packaging states that he "Shoots his Cyclops Eye!". Kind of a funny statement... I know what they mean, but he isn't a cyclops. The Bug-Eye Ghost has two points of articulation (his shoulders) and his giant eye that is attached inside the socket by a yellow string. 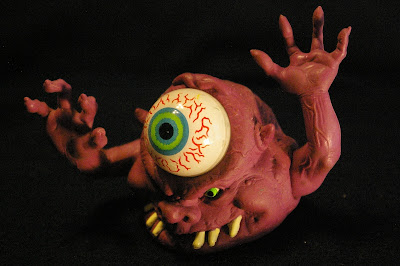 When you squeeze lightly on the ghosts back the air pressure makes his eye ball shoot out. It was always fun to use him to knock over the Ghostbuster figures. I really like the details on the giant eye. The Bug-Eye Ghost made a brief appearance in one episode of the Real Ghostbusters cartoon, but he was more red in color. 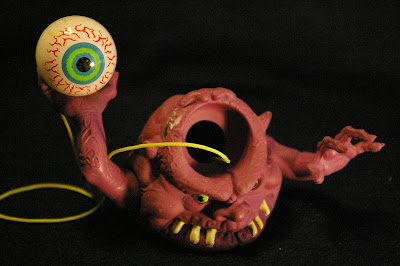