I received Manga Spider-Man as a birthday present from one of my friends several years ago while I was still in college. Greg bought him for me because he thought the figure might be useful for making stop motion animated videos. I'm still to this day not really knowledgeable about the Manga Spider-Man, but his costume varies a bit for the traditional costume. He features the normal mask and shirt, but it has short sleeves. He is wearing gloves and has his wrists taped up like a gymnast. Inside his hands are three hooks that are used with his action feature. I'm not sure if the hooks are "officially" part of Manga Spider-Man's costume. He also appears to be wearing jeans and a spider backpack. 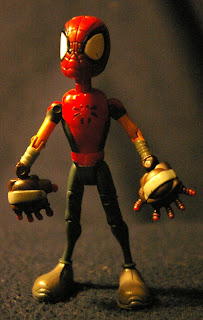 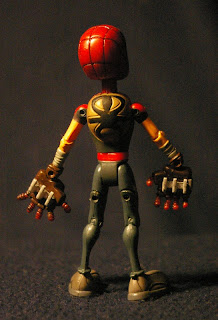 At first glance the figures seems to be very well articulated. When you start playing with him it turns out he has strange articulation. Take a look at the close up below that shows off the joint in his mid thigh that moves out to the side. What are you supposed to do with an articulation cut there? This combined with his large head, hands, and feet while he has such skinny legs. 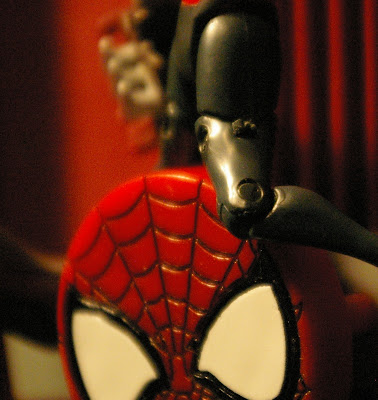 Manga Spider-Man came with a Diorama / Action Feature piece. He is supposed to come "with wall crawling action". Spidey came with a wall sections that represents the side of a building. On the wall there are two  points where you can attached the hooks in the figures hands. There is a large Spider-Man head knob on the back of the wall that allows you to slide these connection point up and down on the wall to simulate his climbing ability. 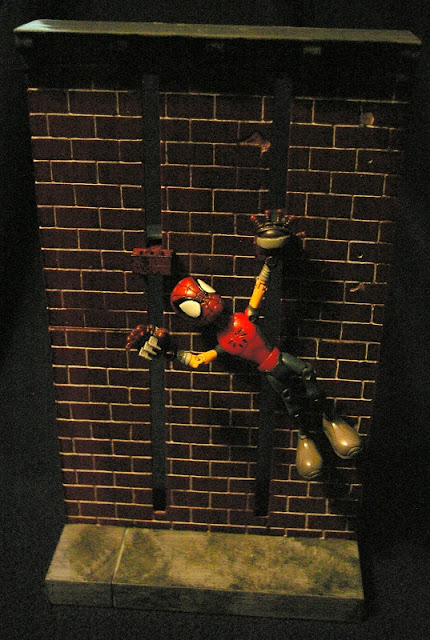 I like the look and design of the figure, but the execution really sucks. Spider-Man has really bizarre articulation and his wall has major short comings as a diorama piece as well as a fun action feature.
Posted by Buzz Chuck at 10:26 PM