I've been trying to figure out what GI Joe: Retaliation Roadblock figure I should buy. Many of the figures feature the Arashikage Ninja Clan logo on their clothes or forearm. Roadblock is not a ninja. There are already enough of them on the team. I can live with the logo on a shirt, but on his arm like a tattoo bugs me. So I picked up the standard Roadblock figure and I'm pretty disappointed. He looks kind of like the Rock, but somethings off. The head sculpt is not quite perfect. His skin tone is a few shades to light, but the biggest problem I have with this figure is the "handle" molded into his hand. 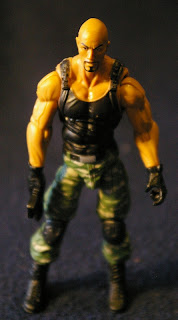 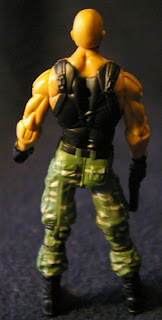 I hate forced play! Anytime an action feature limits what a toy can do it stifles a kids creativity. If an action figure can't be posed in any way except to make it's feature work than a kid will only have the figure do that one action (Example: Toy Biz Colossus). Roadblock's action feature doesn't ruin the entire figure, but having a handle molded into his hand makes it so he can't hold other weapons, drive a vehicle, or do other things. 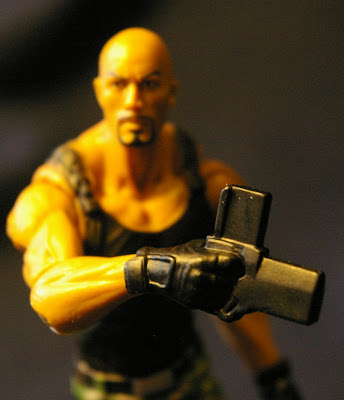 Roadblock comes with four accessories: a shoulder mount (barley pictured), a spring-loaded blade weapon (picture on the mount), a large spring-loaded missile launcher, and missile.I was hoping that he would also come with a standard weapon but he didn't. So This guy is totally geared for kids. I kind of want to steal a black gloved hand from another figure and rescue this one. He's fun for kids I guess. Hasbro is trying to hard on the gimmick on this guy. 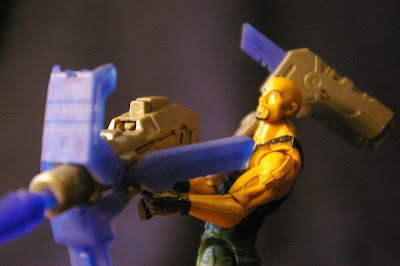