For a rag-tag team of heroes, the Rebel Solders always seem to have the right gear. They had everything from flight suits, to snow boots, to ponchos. The Rebel Commando figure was the good guy army builder for Return of the Jedi. A bunch of Rebel Commandos worked with Luke, Han, Chewie, Leia, the Droids, and the Ewoks to defeat the evil Empire and take down the shield generator. These guys get no credit for all that was accomplished, and they don't complain about it. 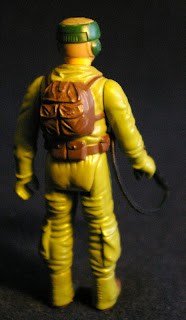 The Rebel Commando is dressed in a green cover-all, boots, and a Rebel Issued Helmet. He has a backpack permanently sculpted  on to his back. He was armed with a laser rifle. He's a good looking figure who is not to hard to come across. He has a lot of cool details like the pockets on his lower legs and his t-shirt wrinkles seen through his unzipped cover-alls. I never really built up a big collection of these guys because I always had tons of GI Joes laying around to bolster the ranks of the Rebel Alliance. 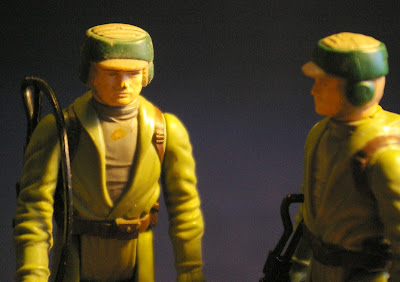