Lethal Impact Bane was part of the Legends of the Dark Knight toy line. He's a massive figure that suffers slightly from being pre-posed and including an action feature. I picked this figure up at a yard sale many years ago. He is missing his accessories and has a few paint scuffs. Bane originally came with some additional Venom Tubes that connected to his head, arms, and back. He also came  with a weapon that snapped on his arm. When you press a button on his back, Bane's left arm snaps up in a punching action. 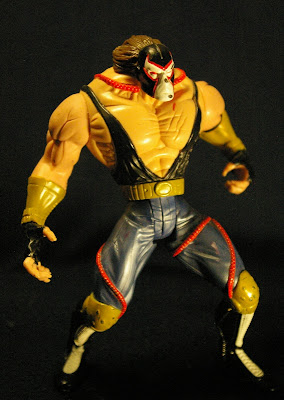 One of the most interesting things about this figure to me is the inclusion of long hair coming out from under his mask. I think it is an unusual choice on the part of the sculptor or design team. Bane is a rather large figure but topples over very easily due to his odd stance and the bulkiness of his torso. 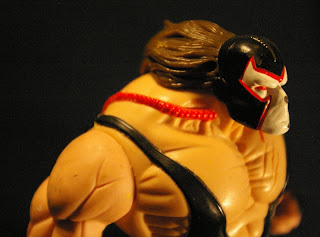