When Toy Biz first released their Uncanny X-Men line I was so excited. I had just started to gain interest in the characters and a toy line was the perfect things to turn me into an obsessed fan-boy. Colossus was not the first figure from the line to be added to my collection, but I did own the entire first wave as a kid. Unfortunately I did decide to part with my X-Men when I stopped collecting in Middle School for a short time. Colossus was recover from my parents attic where he sat in a box with other toys that didn't sell at the flea market. 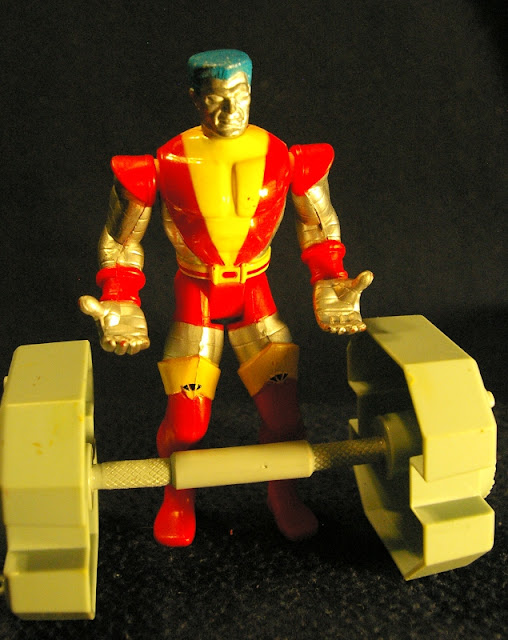 I always liked the character, but do to his limited articulation and action feature, this Colossus figure just isn't that great. There is a lever on his back that makes him raise his arms to pick up us giant weight. This feature fits well with the character, but really limits play. The only thing he was really good for was carrying other X-Men figures who were hurt.

The other big issue I always had with this figure is that his hair is bright blue. In old comics, they only had 12 colors to work with. They frequently used to highlight black with some blue. This didn't mean the item was blue with dark shadows, otherwise there would have been a lot of blue horses in western comics.

The figure held up pretty well over the years. He has a few signs of paint wear on his chest, fingers, and boots.
Posted by Buzz Chuck at 5:47 PM