Today was my second time this season I've been out to the Flea Markets. Today I got my first finds. 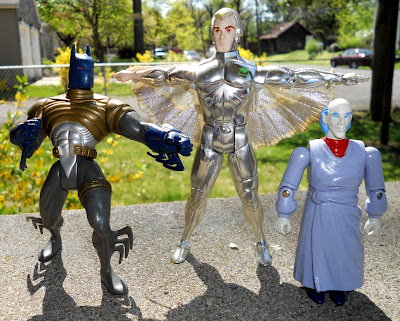 Knight's End Batman from Kenner's Legends of Batman toy line. He's missing his cape and weapon. I'd love to find his cape some day. I'm a big fan of the Knight Fall (Quest & End) story from the 90's Batman comics. I also picked up a nice Quicksilver from Silver Hawks. These figures can be tricky to find. Their chrome often times shows wear and their flesh tone paint often rubs off the chrome. He's not perfects, but he's not bad either for his age. His action feature even still works. When you squeeze his legs this arms pop up to unfold his wings. I also picked up the Robotech Master figure. 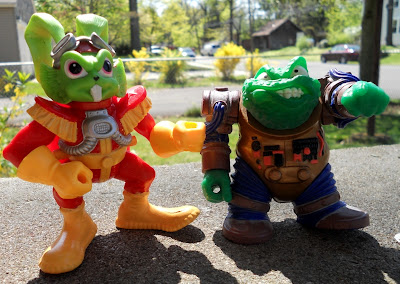 I scored a Captain Bucky O'Hare and the Toad Air Marshal figures. These guys have really cool designs and I always kind of liked the figures. I own one other figure from the line. The original Bucky O'Hare comics were written by Larry Hama of GI Joe fame. My good friend and comic author Doug Moench even wrote an episode of the cartoon show back in the day.

I paid of total of $4.50 for my five figures today. Quicksilver was the most expensive at 2 bucks.
Posted by Buzz Chuck at 6:14 PM