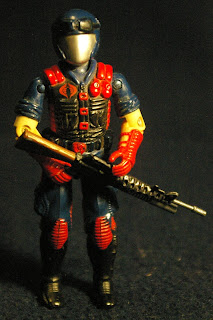 Ever since my Dad gave me a small screwdriver and a dozen o-rings to fix my own Joe I have been a customizer. I have made dozens of original characters as well as classic characters in alternative outfits.

I also like to frequent yard sales and flea markets in search of toys. This often results in finding damaged or broken figures.

Any time I find a broken "trooper" I customize the figure into an Officer. It helps build the ranks of my Cobra Forces, but also explains the variations in their uniforms.

Viper Officer - This figure used the feet from one of the Crimson Twins to repair a Viper. The boots were painted black and he was armed with a custom painted weapon pack gun. This officer figure even appeared frequently in my stop motion animated show "Action Figure Adventures".

Cobra Naval Officer - This figure is a little less straight forward. He uses the head of a Cobra Eel (the head was either badly yellowed or is a knock-off), the torso from Laser Viper, and the arms and legs of Decimator.

I painted the straps on the Laser Viper's torso green to match Decimator's pants.

The figure is my idea of a Decimator wearing a wet suit.

(*side note - That Eel head is really strange to me. The skin is super pale and the gray is an odd color. I don't know of any variations though.)

Cobra Communication Officer - This figure is born out of an early issue of the Marvel Comic. Before Televipers were ever thought of, the Cobra radio operators were just a special "blue shirt". When Hasbro released the giant pack of Cobra Infantry figures in the early 2000's I did some custom work with some of the soldiers since they were so readily available.

This figure has a Hawk head with several additional details. first a mask was sculpted over the figures mouth and painted red. The two earphones were clipped off a weapons pack Breaker headset. They were glued to the figures head and connected with a small piece of rubber band glued to the head between them. The new head set was painted up blue. Then the wire to the head set was glued into the back of a weapons pack Breaker backpack which was also painted blue. 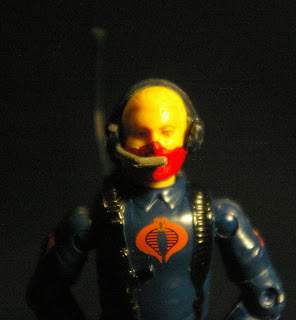 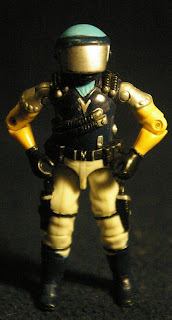 Motor Viper Mechanic - Motor Viper is one of my all time favorite vehicle drivers. I had a busted up figure in need of repairs. He has one arm from each of the Crimson Twins, giving him a shoulder pad on each arm. His pants belong to Static Line from Sky Patrol.

His boots were painted blue to help tie the outfit together.

With the short sleeves and gray pants this figure had sort of a "blue collar" feel. I decided to have him be a Mechanic that supports the rest of the Motor Vipers rather than their leader. 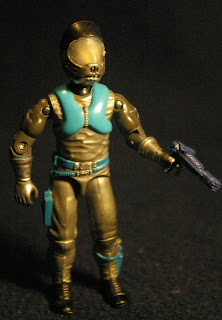 Lamprey Officer - As a kid I bought a beat up Lamprey figure at a flea market. I knew he was from the line, but didn't know anything about him. My find had has his thumbs chewed off on both hands, and I generally pretend he was "Battle Helmet" Cobra Commander.

Later, once I had '83 Cobra Commander and a nice Lamprey I turned him into an "officer". His arms were replaced with Laser Vipers. I painted the gloves silver and armed him with a weapons pack Cobra Commander gun. A little nod to his old roll in my collection.


I decided I wanted to give him a removable helmet. (but I also wanted him to be masked to keep things anonymous. I decided to hollow out the Lamprey Helmet to fit on Croc Master's head. While using my Dremel tool to hollow out the helmet
I accidentally ground away too much of the mask creating a hole. I needed a creative way to give the helmet a new visor. I ground out the rest of the of the visor area. I put a piece of electrical tape over the visor area from the outside and filled the inside with a little hot glue. Once cooled, I removed the tape leaving me with a semi-transparent visor. The helmet looked a little odd of Croc Master, so a ridge was sculpted on the head for the helmet to rest on. Croc Master's head was then painted silver. 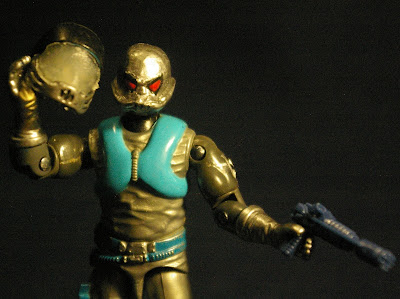 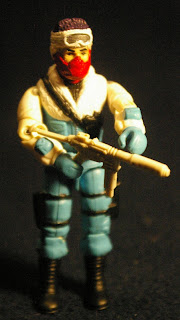 Arctic Commando Snow Serpent Officer - I can't take credit for this idea. Someone on JoeCustoms posted a variation on this figure and I stole the idea. The other Customizer noticed the similarities between Frostbite and the Snow Serpent from the "Arctic Commandos" mail away set.

I used to have tons of Frostbites laying around because I used his thighs for several custom figures for my stop motion show Animation Creation. Frostbite is one of the few figures to not have knives or guns strapped to their thighs.

So basically (after giving him thighs from other figures), I sculpted the mask over his mouth and beard and painted it red. Then I painted some purple on his hat, and light blue on most of his snow suit. I changed the paint scheme on his arms slightly because I try to avoid painting arm joints on custom figures to prevent chipping. 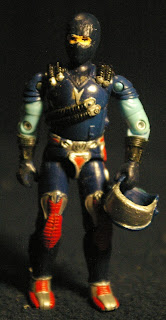 Motor Viper Officer - One of my Motor Viper figures that I had owned for ever broke. His "J-Hook" broke inside the figure. The screws in his legs were so rusted I couldn't get them apart to change the J-Hook. I eventually gave up and set him up with the legs from a Crimson Twin that was still floating around the parts box. I painted over a lot of the silver on his boots with blue. I wanted this figure to also have a removable helmet. I started with a Jinx head for under the helmet. I ground down some of the wrinkles on Jinx's head and hollowed out the helmet. I think the figure looks pretty cool. I painted Jinx's head blue and  finished off the figure.
Posted by Buzz Chuck at 11:00 PM