I've been thinking about it recently, if Disney owns Star Wars... can the put out the Holiday Special on DVD or Blu-Ray? Now, it's not very good, but Star Wars fans will buy anything. It might actually ruin the mystique of the tv special if it is readily available. The only reason to see it is so you can say you've seen it. I know parts (if not all of it) are on youtube.

I first heard about the Star Wars Holiday Special in the mid 90's (I was born in '82 - so I missed Star Wars in the theaters). My best friend's Dad was showing us the bonus features on the laser disc Star Wars box set and in a tour of Skywalker Ranch they mentioned Chewie's son from the holiday special as they walked past a costume rack that contained a small wookie costume. From that day on I had a burning desire to see this piece of Star Wars history. Eventually, once the internet was readily available I read about it a little online. There were not a lot of screen captures out there, and no video copies. The internet was to slow to post videos.

Years later, while standing in line to see the midnight showing of SW EpII I told that same friend I was going to make sure I saw the Holiday Special before EpIII came out.

Matt from X-Entertainment frequently posted about the special back in those days. His site was a big influence on me while my friends and I were working on our site Obscene Newg. I started talking to him on AIM (AOL Instant Messenger - for the young-ins). I eventually asked him if there was a way I could get a copy from him. He asked if I had a fast connection, which I did because I was in college at the time. He told me he'd transfer it to me over AIM, but he'd only give it one try. If it failed or it took to long he'd cut it off. He sent me a low quality Real Video file and I watched it that very evening. I have it burnt onto a CD somewhere.

A few years later a friend of mine picked up a box of old VHS tapes from his neighbor's trash pile when they moved away. He didn't have cable at the time and enjoyed watching all these poor quality tape of old shows they  had recorded off the television. In this box along with a bunch of Godzilla movies and some episode of the Droids cartoon was a tape of The Star Wars Holiday Special. I borrowed that tape and watched it with some friends while making a copy of it. My copy of that tape sits proudly next to my DVD and Blu-Ray copies of both Trilogies. (The VHS tapes of the Trilogy have been moved elsewhere to free up space.

On to this Christmas... 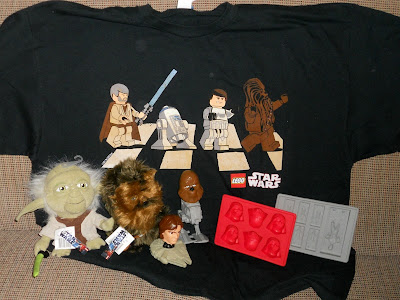 My sister, brother-in-law, and niece got me a bunch of Star Wars stuff this year. A Lego Star Wars t-shirt spoofing the Beatles Abbey Road. A plush Yoda and Chewie that my niece likes to play with. They also got me a Darth Vader head and a Han Solo in Carbonite ice cube trays. My mom gave me a Han Solo and Chewie bobble head fast food toys from a few years ago.