Not to long ago, JboyPacman from the Cosmic Arc sent me this Wolverine figure from 1996 in a package of goodies. He's from a series of figures called Ninja Force. Wolverine is dressed in a Gi. The most interesting things about this figure to me is that he is depicted with his bone claws. In the comics Magneto ripped out the Adamantium from Wolverine's bones and claws in 1993, and I'm pretty sure it was re-graphed long before this figure was released. 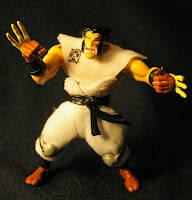 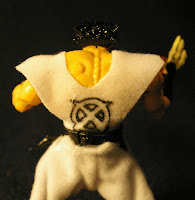 Wolverine came with several weapons that can be connected in several combinations. He has an axe, grappling hook, dagger, and chain. The figure also comes with a fabric shirt & pants, plastic belt, and knee pads. 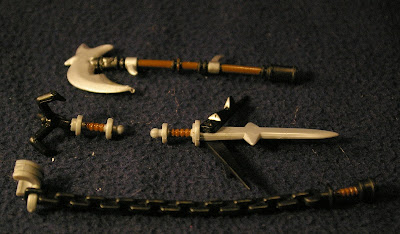 One of Wolvrine's hands is sculpted so he can hold weapons. The other is sculpted into a fist. With his strange combinable weapon, two open hands would have been useful. The photo below show one of the many combinations that can be made out of his weapons. 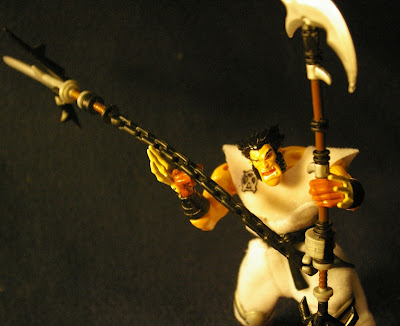 Below is the card back to Ninja Force Wolverine which Jboy was cool enough to include. 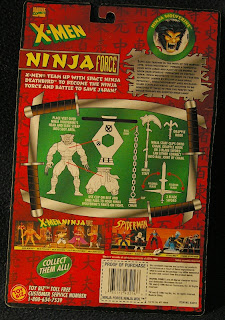 Soft goods accessories are cool, but sometimes they don't work as well as intended. Wolverine's shirt fits nicely, but his pants are a little loose. I kind of like displaying him without the cloth pants. He has black painted pants underneath. 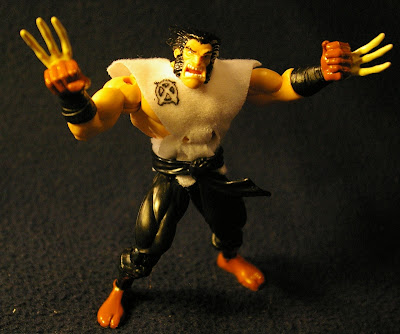