Today's post is about two recent toy show purchases. The first is the Jail Bird Air Speeder from the Cops 'n' Crooks toy line by Hasbro. I bought it loose at the Wayne NJ toy show a few months ago. The second vehicle in today's post is the VR Trooper Skyborg Jet. I bought the Skyborg at Retro Con because I had never seen this vehicle before and the fact that it reused the molds from Hasbro's Cops toys. The guy who sold it to me said it was a Power Rangers vehicle, and he was close. It is actually from the VR Trooper toy line. Both the Power Rangers and VR Trooper were produced by SABAN. These two vehicles are very similar, but have slightly different tooling in a few places. 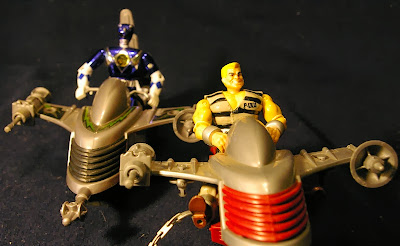 The Jail Bird was an air speeder used by the Crooks in Hasbro's late 80's futuristic police toy line. I loved playing with it at my buddy Derek's house when we were kids. He had all the wave one toys because his Dad (Doug Moench) was writing the comic book. It's a small one man craft that is armed with a couple of laser cannons and little bombs that can be drop from the wings. My Jail Bird is missing the back rest, handle bars, and stickers.

The Skyborg Jet reuses the parts from the Jail Bird, but all the maroon parts are molded in black. The tooling has been changed slightly. The slots in the wings for the little bombs have been changed to holes. From what I found online, it looks like there were guns that shot spring-loaded missiles that clipped into those holes. The other major tooling change is that all the engine details on the side of the vehicle (under the silver wings/hood) has been removed. I think this is to accommodate the hip articulation on the VR Trooper toys. Cops figures had  80's GI Joe style hips that can open wide, while the VR figures had vintage Star Wars style hips, which are very straight legged. I know my Skyborg may be missing a few parts like the guns and missiles. I thought it was fun to see the reuse of molds from other toy lines, so I'm glad I picked it up. 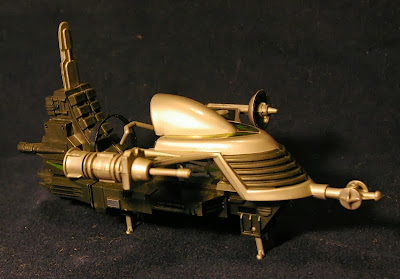 I knew that the Cobra Firebat from GI Joe was retooled for VR Troopers, making this is the second Hasbro toy to be reused in the VR Trooper line. Now I need to track down that blue retooled Firebat.
Posted by Buzz Chuck at 6:12 PM