Rocks and Bugs and Things

On a recent flea marketing trip I saw this strange transforming rock in a bag of toys at a vendor's table who I have dealt with before. Often times the guys toys are over prices and I don't buy a lot, but I figured I'd ask. He said two bucks. Yeah, I'll give two bucks for this thing. After I paid the guys asked me if it went to Masters of the Universe. I said, "No it's from Rocks and Bugs and Things by Ideal." He made a face like he had never heard of it. 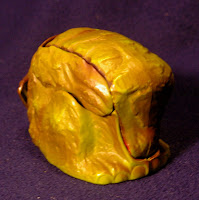 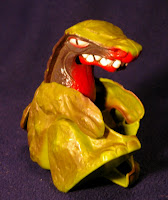 I'm not a real expert on the line, but what I know about them is R&B&T is a line of Rocks and Bugs that all have a spring-loaded attack type of feature. The rocks all turn into monstrous creatures with large mouths and all the bugs have some sort of biting action. Each Rock or Bug came with a "Thing" called a Mordle used to feed the Rock or Bug. After I came back from the New Jersey Collector's Con I posted about Mordles. A company called Toyfinity had the rights to the R&B&T toyline and is currently producing new Mordles based on the original toys. An upcoming release of Mordles will use the Glyos system and be compatable with a lot of other toylines. 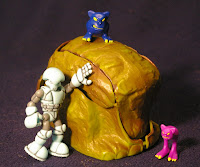 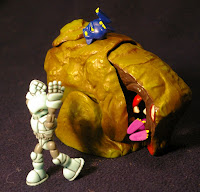 The Rock that I bought at the flea market is called Trapasaurus. It's a greenish/brown rock that can spring open to reveal a dinosaur/alligator type face. It has pivot articulation at the neck and hips This allows the neck to pop up and for the torso to lean forward. The Trapasaurus's jaw is also articulated to allow him to chew on his Mordle. There is a little knob on his back that I think is supposed to activate his transformation, but it seems like a rubber band inside him broke because the knob is kind of loose and doesn't do much. I can manually turn him into a rock and he easily springs back open into dino mode.