As a kid, I had several RoboCop and the Ultra Police toys before I ever saw the RoboCop movie. When the movie was on tv one time my Mom taped it for me on the VCR. The movie was so violent she would make me stop watching after each big action scene. Then I'd have to wait until the next day to watch more of it. The title character was the first figure I had from the toy line and I though he was pretty awesome. 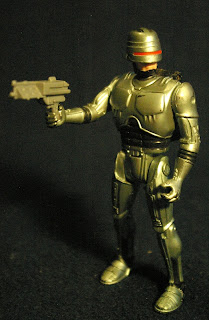 In 1989 when these figures were released, I was in 1st grade. I loved the built-in cap firing backpack. RoboCop comes with two important accessories. His helmet which features nice sculpting and a little paint work looks great. His helmet fits tightly and doesn't fall off while playing with him. RoboCop also comes with an insanely cool gun. His action figure weapon is not movie accurate. 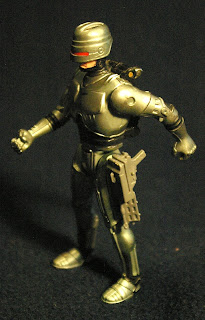 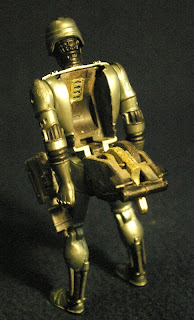 Like all the figures in the line, RoboCop has a hole in his leg where his gun can be "holstered" via a peg on the side of the weapon. His backpack can flip down to allow you to feed a roll of caps though his back. RoboCop came with two rolls of blue caps what could be fired in rapid succession through his backpack. This makes a lot of noise and smoke. 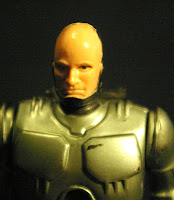 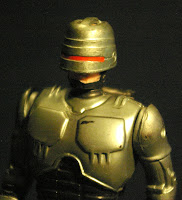 The head sculpt on this figure without his helmet does a nice job of capturing Peter Weller's likeness. You can see my figure has a little battle damage that he picked up over the years beating up on my other action figures. His armor is slightly scuffed.
Posted by Buzz Chuck at 7:34 AM