Mekaneck was the heroic spy for the Masters of the Universe. Now this doesn't mean he's a suave British guy with cool gadgets, he's kind of a dork with a periscope for a head. By twisting Mekaneck's waist his neck automatically extends. This allows him to look over tall objects to spy on the bad guys. He is one of the few characters (like Man-at-Arms) who seems to be wearing a body suit. Most of the Masters are bare-skinned under their removable armor. Mekaneck has red and silver armor over his blue body suit. His angular helmet and goggles match his armor nicely. One of the oddest paint choices on this figure in my opinion is his silver barbarian boots. I would have had them match his fuzzy underpants. 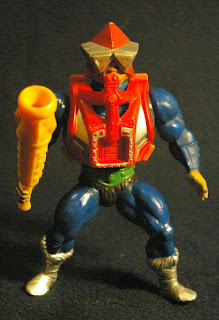 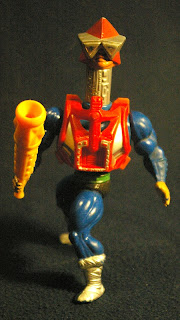 Mekaneck shares his armor sculpt with Stinkor. Other than his head, Mekaneck has a very standard hero body. Mekaneck came with an enormous yellow club which is a unique accessory to him. Mek was one of my favorite heroes as a kid. I played with him all the time. I always wished the neck on the figure could extend a little farther. Mattel really came through on that with the MOTU Classics version of the figure. 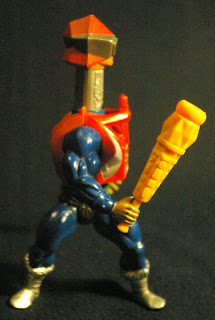