Since this figure was announced last year at Comic Con, I've been dying to get my hands on him. Monday I stopped at my two favorite comic book stores, and there he was sitting on the shelf at the closer of the two to my house. I paid a little bit of a premium price for him at the comic shop vs Target, but it wasn't outrageous. I debated about saving him for an October post since he is horror themed, but I was too exited. My best friend's (since first grade) father is comic book writer Doug Moench. Over the years I have enjoyed reading many comics by him, but the two most exciting "releases" for me was The Knight Fall story arc of the monthly Batman book and the second Batman Vampire graphic novel, Bloodstorm. If you read my recent post "Toys that Go Bump in the Night" you probably saw my bright red Bloodstorm poster that I have hanging in my toy room. It hung next to my bed at my parents house from the time the book was published until the day I moved out of their house. 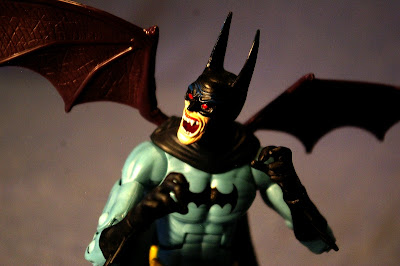 Vampire Batman is part of Mattel's Batman Unlimited toyline. This series has been releasing various unusual versions of Batman, often from specific stories or graphic novels. This Batman is based on the art work by Kelley Jones in the Batman Vampire books Red Rain and Bloodstorm. The figure has wings that must be attached after he is removed from the package. He has red eyes and a mouth full of sharp teeth. In true Kelley Jones styles his cowl features extra long ears. 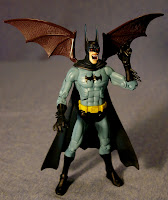 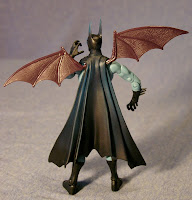 Vampire Batman comes with one accessory, it's his vampire hunting stake featuring a nice bat-motif. I wish he could hold it a little better. His hands have a nice sculpt for making him look kind of creepy and scary, but they don't grab the stake real well. 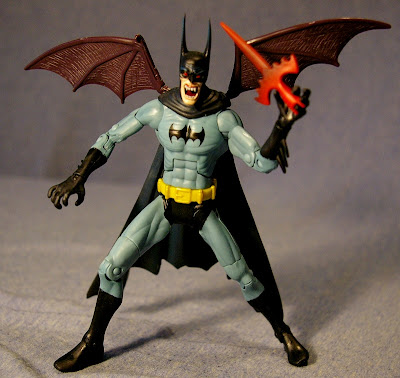 Vampire Batman features a very skinny body sculpt. Helping to give him that creepy undead vibe. You can see him here next to the ultra-bulky Frank Miller style Batman from The Dark Knight Returns as well as a standard Batman. All three of these figures are from the Batman Unlimited line. 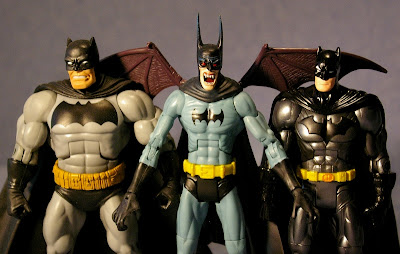 I think the figure turned out pretty well. If I had the ability to change his design, the two things I would change are his wings and cape. I think both could use to be bigger. The wings aren't to far out of scale but a little more would look nice. His cape doesn't do Kelley Jones' style justice at all. That man sometimes makes Batman's cape seem like it's a mile long. Below you can see this new figure along side the Vampire Batman statue from a few years ago. The statue got the wings and the cape right. 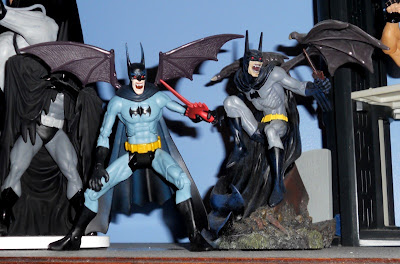