Time is kind of short today, so this post is going to be kind of short. Below are two PVC Looney Toons figures of the Tasmanian Devil. One figure is eating an ice cream cone that's melting down his arm. The other figure is holding his hand above his head like he's having a tantrum. Both figures were acquired at yard sales in the early 90's when I was actively collection Taz figures. I had a big display of PVC figures set up on a shelf in my bedroom in Elementary School. 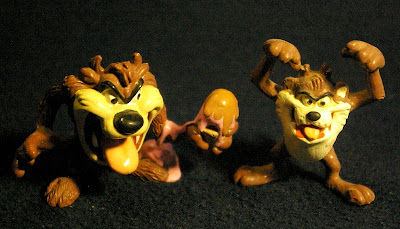 The Ice Cream Taz was made by Applause in 1998. I don't have any real details on the other figure.

Every September my buddies and I camp out in a field all night and pull guard duty for a bunch of antique tractors. The local 2-Cylinder Tractor Club (John Deere) has their Antique Tractor Show on Saturday. Many of the people involved have to trailer their tractors to the show site and if they are bringing more than one often drop some off the night before and then bring their final tractor to the show in the morning. The Club buys event insurance, but they have to have someone there to make sure no one steals or vandalizes them. The people that restore these put as much time and money into them as many antique car collectors do. Several of my relative, including my Uncles and Dad show old farm equipment at the event. So from 9 PM until 6 AM, I'll be guarding the Tractors. As a kid I always wished my Dad and I were the guards, because a kid from school and his Dad did it. When they stopped I was volunteered by my Dad. At this point I was in college and my Dad didn't have to volunteer himself. We've been doing this for 11 years I think.
Posted by Buzz Chuck at 4:40 PM