Once again this year Retro Con has a nice line-up of Celebrity Guests. The guest list included internet personalities, authors, artists, and actors. The Angry Video Game Nerd, Nostalgia Critic and Mr. Lobo are all pop culture reviewers of internet fame. Larry Hama and Bob Budiansky are both important comic book writers and Hasbro employees if you follow either one of Hasbro's biggest brands. Larry wrote the entire original comic book run for GI Joe and penned most of the file cards featured on their packages. Bob wrote the Transfomers Tech Specs and many early issues of their comic. Neil Ross who voiced many characters in 80's cartoons was on hand as well as Don Fullilove who played Mayor Goldie Wison in Back to the Future. 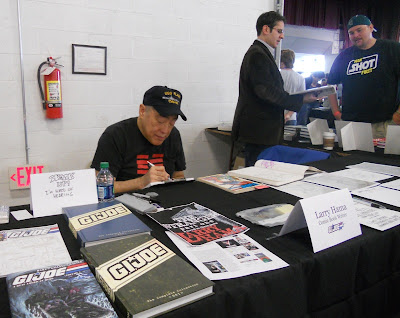 Right inside the main room of the convention Mark Bellomo and Larry Hama had table butted up against each other. Mark is responsible for some amazing toy books like The Ultimate Guide to G.I. Joe 1982-1994 and Totally Tubular 80's Toys. Larry, as mention in the intro is the man behind the personality given to each and every GI Joe figure. I love talking with Mark about all the projects he's got in the works. Larry took time to talk to fan when approached, but most of the day he quietly sketched comic characters for fans. 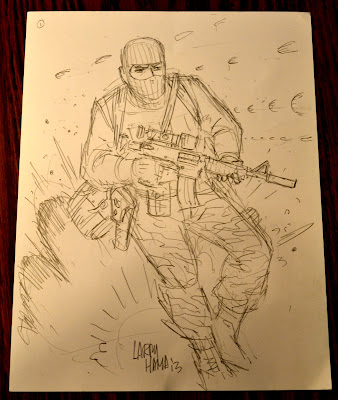 Larry had a sign up sheet on his table for sketches. All you had to do was write down your name and the character you wanted. Each pencil sketch took about fifteen minutes depending on how often he stopped to sign autographs. He charged twenty dollars for the sketches, but he did not accept money up front. I asked him do draw Beach Head for me. He was always one of my favorite characters. Beach Head was the very first brand new GI Joe I ever got straight out of the package. His role of training the "Rawhides" in GI Joe the movie is such an important part of my childhood. 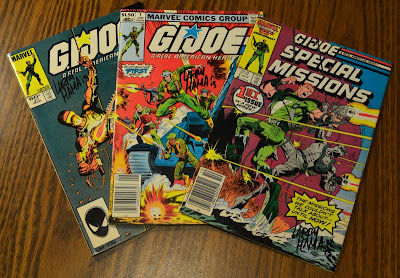 Retro Con was the 2nd time I met Larry Hama, but the first time I knew ahead of time. So I had to bring some old issues of GI Joe with me. I own almost every issue of the original comic series. In the photo above you can see I took Issue #21 "Silent Interlude", Issue #1, and Special Mission #1. Larry commented on how great the condition was of my first printing of Issue #21. 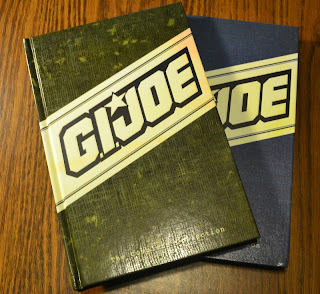 I've gone back and forth a few times about buying the hardback GIJoe: The Complete Collection volumes. Since I already own all the early issues of the comics it seems repetitive, but these books are really nicely put together and it saves me digging issues out of comic boxes if I want to reread them. Mark Bellomo had copies with him for sale, since he is compiling the books and wrote a very interesting forward at the beginning of each volume. I figured now was the chance to get them signed my both Mark and Larry so I picked up Vol 1 and 2. 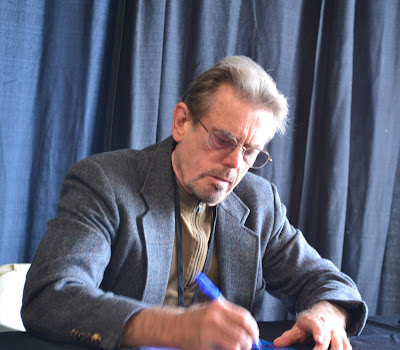 The other guest I was very excited to meet was Neil Ross. He is know for his work on many 80's cartoons including GI Joe, Transformers, and Voltron to name a few. Shipwreck always had such a great presence in the old cartoon, and most of that was thanks to Neil's Jack Nicholson like voice for the sailor. I talked with Neil a little about working in voice acting back in the day. I told him that Shipwreck was one of my favorites from the GI Joe  cartoon and he said in character, "Well, thanks for saying so Matey!" I had Neil sign a 25th Anniversary Shipwreck figure. 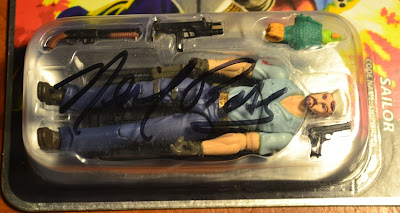