This was the 2nd year for the Philadelphia area pop culture show, Retro Con. This year was bigger and better than last year. Retro Con has really done a nice job of establishing itself as an annual convention. Last year there were a handful of guests, a costume contest, and lots of toy dealers. This year Retro Con added panels and a pop culture car show as well as expanding on everything they had to offer during their first event. 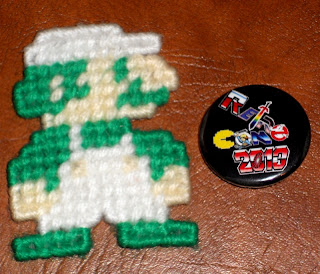 This yarn craft Luigi was my gift for pre-ordering my ticket. I also go a Retro Con 2013 button. 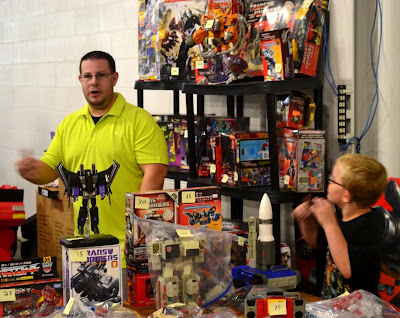 I enjoyed seeing all the families sharing the joy of toy collecting and pop culture .
Here is a father/son toy dealer that stocked mostly Transformer toys. 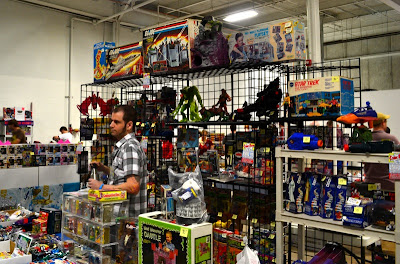 The Comic Store from Delaware had a huge booth again this year. They had the GI Joe '83 Head Quarters with its box as well as a vintage Skystriker to name a few toys. 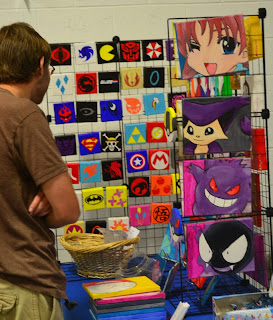 Like last year, there were several artists selling paintings, prints, and self-published comics. 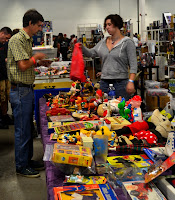 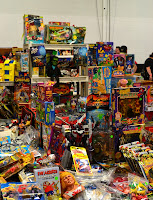 There were literally so many toys at the show that I was overwhelmmed. I couldn't figure out what to buy for the first half hour I was there. Don't worry, I got over it eventually and bought a ton of stuff. I know several of the artists, collectors, and toy resellers that were at Retro Con. We had an inside joke thoughout the day focused around the guy in the checked shirt in the picture above. He looks eerily like my buddy Paul's father. We kept talking about the guy Cos-playing as Paul's dad. 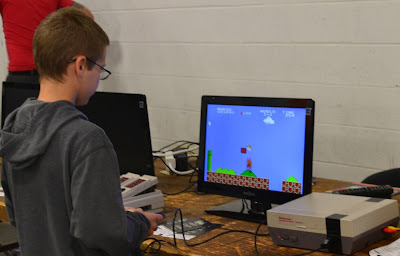 I saw a lot of people having fun playing retro games at the Too Many Games booth. I wish I has my camera on me when a little kid dressed as Mario was playing Super Mario Brothers. 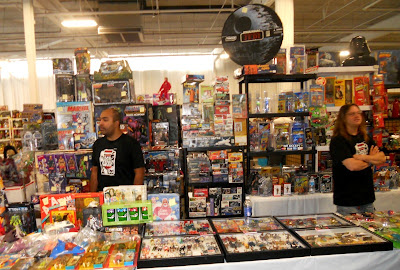 I still can't believe how many amazing toys I saw for sale at Retro Con. Rose and Tony, rest up today because tomorrow it's time to start planning for Retro Con 2014!

I'll be posting about the pop culture car show, costumes, and the toys I bought in the next few days.
Posted by Buzz Chuck at 8:20 PM