Rock 'N Roll Michaelangelo was released in 1989 as part of the "Wacky Action" line of Turtles that contained wind-up action features. Mikey's action feature was that his right arm would spin 360 degrees below the wrist allowing him to spin his weapons around. He came with three bright green weapons. He came with nunchukus (not pictured), which was a good thing since my original release Mikey's chucks had already broken by this point. He also came with two weirder weapons, Sewer Snakes and a Swiss-Army Sewer Cover. On the figure's side there is a little knob, disguised as a pocket on his belt, that is used to wind-up Michaelangelo's wrist. 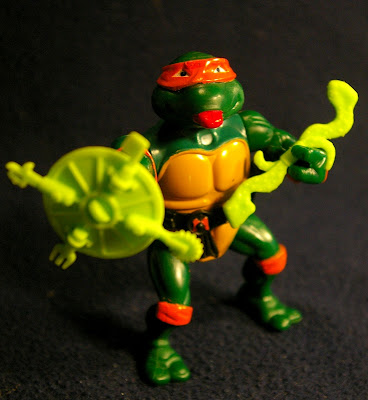 As a kid I really loved this figure. The head sculpt featuring Mikey's tongue sticking out from between his smiling lips, which really captured his personality. I also always felt that this figure captured his likeness from the cartoon better than his original release. (Which was more based on the comics, sort of...) I eventually parted with my original RnR Michaelangelo when I sold off just about all my Turtles in Middle School. There were actually two figures photographed for this post. One came into my collection when my Mom picked up a collection of Turtles for me at a yard sale quite some time ago. The other one has a similar story, but I don't remember. I passed one of these figures onto a fellow blogger last summer.

Special thanks to everyone who visited Action Figure Adventures from making August 2013 my best month ever for page visits. I've been trying hard to crank out quality content and I appreciate all the people that stop by. Feel free to leave a comment, it's fun to hear what people think of the various toys featured here on AFA. Let me know what toy lines you want to see more toys from. - BuzzChuck
Posted by Buzz Chuck at 12:19 AM