Deep Six was one of the most unique figures in the Real American Hero line of GI Joes. In many ways his uniqueness wasn't really a good thing. Deep Six was kind of a brick. His only articulation points are at his shoulders. He can't even hold a weapon with his blocky fists. Deep Six came packaged with his flying submarine, the S.H.A.R.C. which was a small one-man craft. 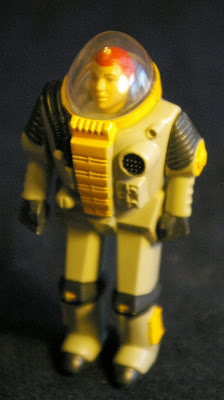 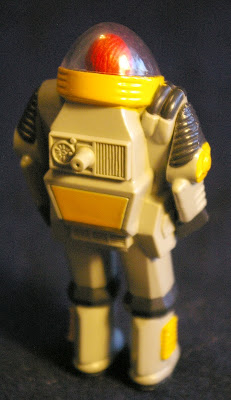 Deep Six came with a plastic billows that attaches to his back. The billows allows you to pump air in and out of his hollow body. This makes him dive and surface when played with in water. It's a neat gimmick for a deep sea diver, but to make it work his sculpt suffered. (Billows not pictures, but I do have them somewhere). At one point in time, I cracked open one of these figures to use his head for a custom figure of Deep Six out of his scuba suit. My buddy Paul gave me the figure below because his dome was broken off, so he couldn't resell him. I kind of like having him in my collection with and without his helmet. 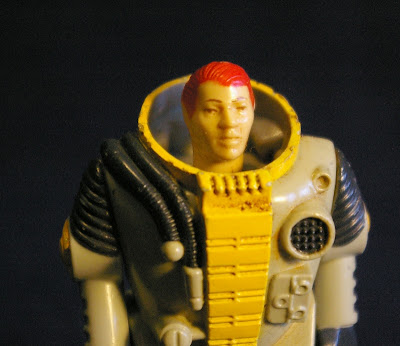 Well, I'm off to the farm. I have to do some painting to help get ready for the Haunted Hayride. We used to have a Chainsaw Massacre Drive-In scene as well as a Zombie Gas Station scene. This year, the Drive-In screen and projector are being moved next to the gas station, which I am helping to paint up to look like the snack stand for the theater. The Chainsaw's are going elsewhere on the hayride trail and the zombies are being moved into the corn maze. I haven't heard what movie is playing at the Drive-In this year. Since the chainsaws aren't there anymore I can't imagine we will still be playing Chainsaw Massacre. Oh, and the actors at the scene will be creepy clowns this year.
Posted by Buzz Chuck at 7:15 AM