Like the Dollar General GI Joes and Batman figures I've posted about before, I have also picked up a set of four Transformers. Each figure cost $6. Last week I saw these Transformers at Big Lots for $5. Maybe I should have waited. Star Scream is a pretty good likeness to his G1 and cartoon counterpart. He comes with two guns that can be held in his hands or mounted on his wings. 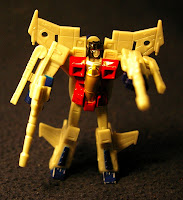 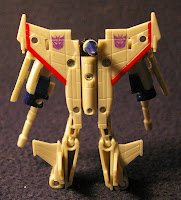 I had a hard time figuring out his transformation. Luckily there were instructions in the package. It is interesting that he actually has two cockpits sculpted on. One shows up on his torso in robot mode while the other one shows up on the top of the plane in jet mode. He has long flaps on the sides of his arms that I think look kind of weird. They are important for plane mode, but they look kind of goofy in robot mode. 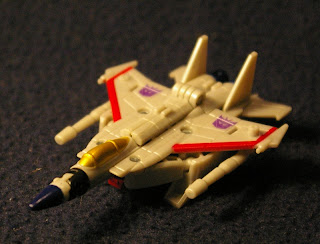 The other Transfomers in this wave are Optimus Prime, Megatron (tank) and Bumblebee.
Posted by Buzz Chuck at 4:51 PM