After the first X-Men movie was out of theaters I picked up Rouge real cheap at Toys R Us. At the time my buddies and I were in the middle of creating our first stop motion animated series for our college cable stations. There were many occasions where we needed generic civilian action figures for the video segments. This young lady in a sweater and jeans seemed perfect. Now, straight out of the package she had long maroon gloves that went up almost to her elbows and a white streak in her hair. Both of these details are important for a Rouge figure, but not so great for your average teenage girl. I used my Dremel to sand down the ridge where here gloves ended and painted her arms flesh tone. If you look close you can see I should have sanded a little more, but in the videos you can't really tell. I also repainted her hair brown and gave it a nice dark brown wash.

Originally Rouge came with a long green coat and a scarf like she wears in a couple of scenes in the movie. They are laying around somewhere in a bin of accessories that could be useful as props for animating projects. I had planned to use this figure with her coat in a video called "Teenage Runaway" that never got past the brainstorming phase. The video would have used the song by the same name preformed by the Donnas. One of the things that kept that from happening was her poor articulation. Her hip articulation is terrible and her shoulders are her only joint in her arms. 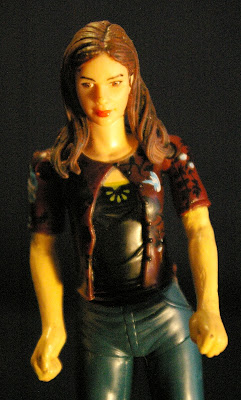 We were probably already half way through production of the series, Animation Creation, when I picked up and customized this figure. She ended up making appearances in the last two episodes. In Animation Creation Episode 9 she is one of two customers at the bank that is being robbed by some Crooks in a musical bit about the adventures of the Millersville University Police Department. Rouge also apears as an interviewer in the "Public Relations" section of  Animation Creation Episode 10. It's funny that the customized movie Professor X figures shows up in the same two segments as the Banker and the Main Interviewer.
Posted by Buzz Chuck at 11:22 PM