I went to the NJCC show today. This toy show has been taking place in Cherry Hill, NJ for several years. I meet up with some of my friends who I went to the Wayne Toy Show  with a few weeks ago. Tony and Rose were promoting their show Retro Con and Nick was buying of GI Joes like there is no tomorrow. I didn't see Mike buy much. It was a pretty good show, but I got tired of hanging out forever. NJCC was bigger than Wayne, but smaller than Retro Con. There really wasn't enough to keep my interest all day, but they had some pretty awesome door prizes, and that got me to hang out forever.

Along with tons of vendors the show also had a few guest. I had fun talking to toy author Mark Bellomo again. I've had some of Mark's books forever, but I first got to talk to him last year at Retro Con. He told me that he is finishing up a book on the Vintage Star Wars figures. This should be a pretty awesome book. I could talk to that guy all day.

Some people from Boss Fight Studios were at the show. These guys do work for Hasbro for their modern GI Joes as well as sculpting the heads for the GI Joe Collectors Club figures. They do the heads for both the Joe Con Sets and the new Club Subscription figures. It was really cool to watch the guy sculpt a custom head out of wax using a hot tool. They had working drawings of some of their official released GI Joe items as well as lots of cool custom stuff they created for themselves. John Kent from ToyFinity was present showing off all the toys his company has to offer. They are responsible for the Glyos system used in various action figure lines that allow for all the parts to be interchanged. They also have the rights to some older toy lines that Ideal used to make and are slowly relaunching "Rocks and Bugs and Things" as well as "Robo Force". John even had some of the Four Horseman's Power Lords Prototypes available. The guys that sculpt the MOTU Classics and DC Universe Classics figures bought the rights to the old Power Lords line and are making all new figures. The Prototypes looked great.

There were some really great customizers at the NJCC, showing off their work. I really liked this vintage Masters of the Universe style Crystal Ball from GI Joe. The detail on the vest is amazing. 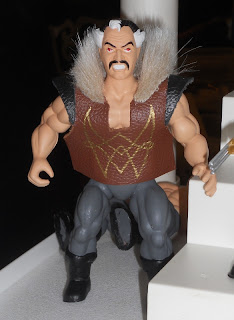 One of the guys was showing off a half dozen custom vintage Hiss Tanks. My favorite one was a Hiss/X-Wing Fighter. He made one that was the A-Team Van and one was a Chia Pet. He even did a Mr. Potato Head Hiss Tank. Pretty funny stuff. 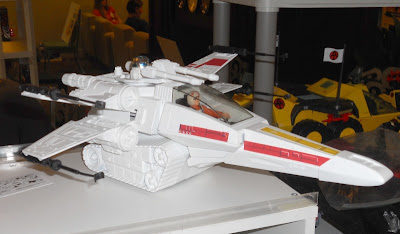 I saw on the NJCC website that they were going to have Bumble Bee Camaro at the show, but I had to laugh when I saw three of them there.

Over the next week or so I will be posting about all the toys I bought. I got some pretty good stuff today.