As a kid I was a big fan of he Mighty Morphin' Power Rangers show. I was a little old for the toys (ha ha ha... since I'm buying PR toys in my 30's now) at the time. I only owned one Ranger figure as a kid. After the first few seasons I sort of stopped paying attention. When the show switch over to Power Rangers Zeo I stopped watching because I didn't like their helmets. I didn't like the "Star" and "Equals Sign" visors. Ever since then, I decide if I will watch Power Rangers based on the helmets. I watched some of Ninja Storm and Dino Thunder, but I was in college and had other things to do. I hadn't watched any seasons since then. Power Rangers Samurai had really bad helmets also. The Blue Ranger's visor looked like a pot leaf. When I saw an commercial for Megaforce I got really excited. It had a great vide to it. Megaforce felt like the original show. I loved their helmets and the add showed this massive battle with all the Power Rangers from the past. I set my DVR and have been watching the show since. The other day at Toys R Us, I saw the Action Pack that contained all the Megaforce Rangers and decided to pick it up. 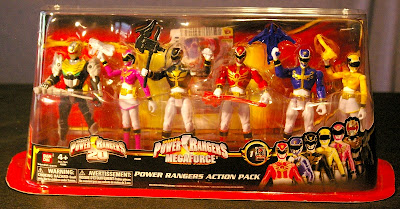 The package nicely displays the six figures within. Robo Knight, Pink, Black, Red, Blue, and Yellow Ranger can all be seen inside. They are each holding their main weapons. The set also includes a Red Ranger Power Card and blasters for each of the figures are hidden in the package. 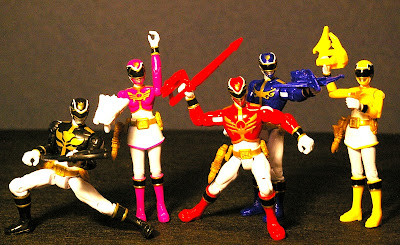 I pulled them out of the package and had fun posing them around. Each of the Rangers comes with three accessories. They has a blaster that can attach to their hip, a morpher that hooks on their other hip, and their main weapon. The blasters are a little over sized, while the morphers are much smaller than they appear in the show. The Rangers have pretty decent articulation. The boys are better figures than the girls. They all have articulation at the neck, shoulders, elbows, wrists, hips, knees, and boots. 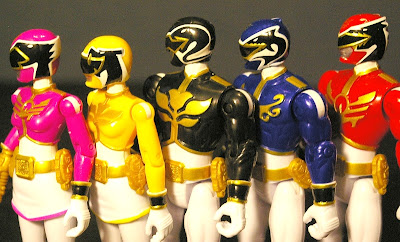 As I mentioned, I really like the Megaforce Helmets. None of them have weird visors and all of them do a nice job of representing the "animal" that gives them their power. In the order they are pictured above: Phoenix, Tiger, Snake, Shark, and Dragon. The tiger is perhaps the animal/logo with the weakest likeness. I wonder what it was in the original Japanese series. Sometimes the translation isn't perfect. You can see that the girls are shorter and more petite than the boys. 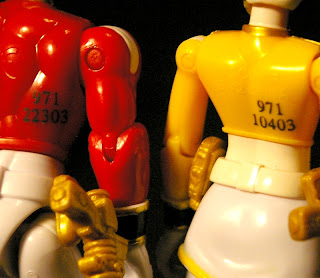 I have three complaints about these figures, I still like them but... I really wish they all had bicept cut articulation. I wish the girls hips were not made useless by their skirts and why do all the Rangers have numbers printed on their backs? It's most noticeable on the light colored rangers like Yellow. 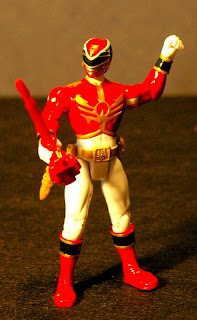 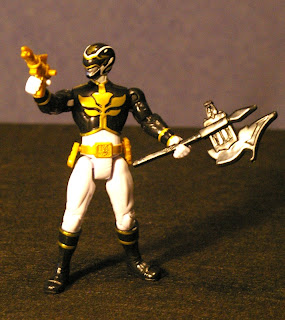 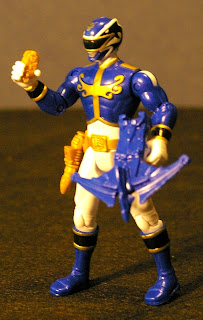 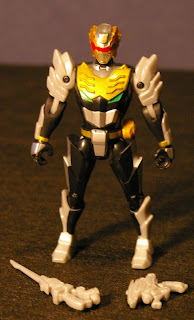 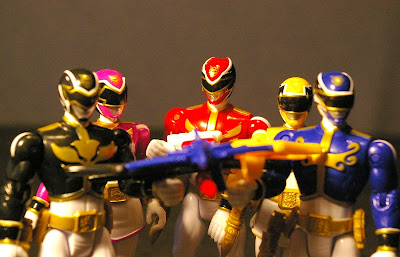 I love the fact that just like the MMPR, the Megaforce team can combine their weapons to form a special Megaforce Blaster. The toy weapons all connect to form this weapon. I have always thought it was funny that the Rangers call each other by their names while in Ranger Mode. This is something that has not changed in 20 years. It cracks me up. It doesn't seem to hard to figure out who they are if they go around shouting their names at each other. 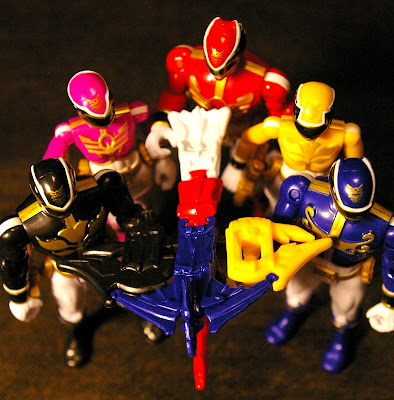 Here is an over head view of their weapons all connected. I had trouble figuring out how to attach the Snake Axe and Tiger Claw at first. It doesn't stay together real well. They interlock, but the slightest bump and they come apart. The Axe handle clips into a groove on the back of the claw while they both lock with the ends of the blowgun. 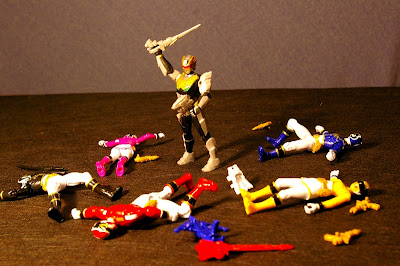 So far I haven't really talked much about Robo Knight. He is a robotic Ranger that was created centuries ago. We was dormant and recently awoke. He is programed to project the environment. He has his own special Robo Morpher and comes with two other accessories that are actually two different modes of the same weapon. Similar to the MMPR, Robot Knights weapon has a blaster and blade mode. In the show Robo Knight can morph into the Lion Zord. Troy, the Red Ranger has had several dreams about Robot Knight leading various Rangers into battle. Only time will tell what these dreams mean. 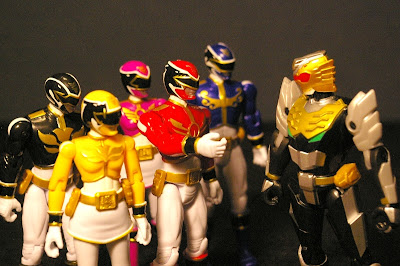 The first time the Ranger met  Robot Knight he made quick work of the monster that was kicking their ass. At the end of the fight the Rangers all commented about how awesome Robo Knight was. Troy tried to make friends with Robo Knight by shaking hands.

In a big F-You move Robo Knight turned around and walked away from the Human Rangers. What did this mean for the Rangers and their relationship with Robo Knight... well I don't want to ruin the entire show. It's been a fun season so far. Just slightly off topic, but I love this photo and I didn't photoshop it. That was all done in camera with depth of field and lighting. 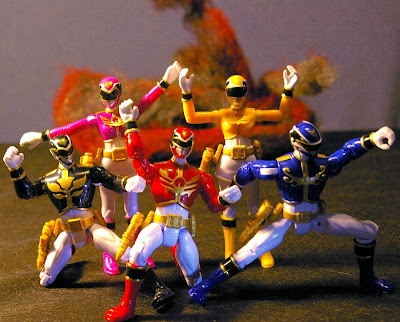 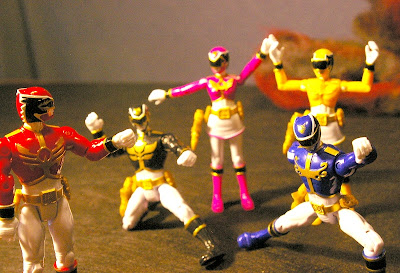 Troy: Hold it everybody!

Troy:  Ladies when we say "Go Go Megaforce!" everyone is supposed to strike a dynamic pose while the giant explosion goes off behind us. Are those really the best poses you can do? 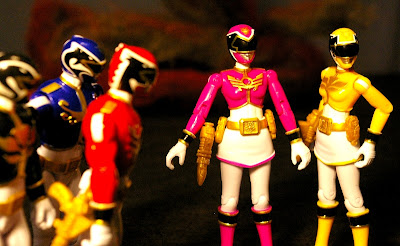 Emma: Look Troy, with our cute skirts we can't move our hips at all.

Gia: Yeah, and you boys want us to look good right? 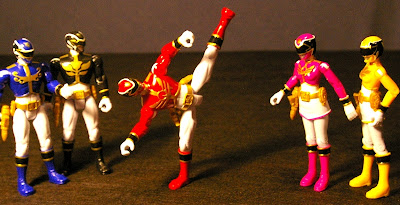 Troy: Come on, every Mega Power Ranger has to be able to do a high kick! It's a requirement. 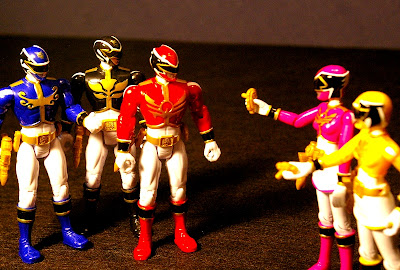 Emma: Okay, fine. Here are our morphers. You three will have to protect Earth from alien invaders without us.

Gia: Thank God, I'm off the team. Now I can wear something other than Yellow. Hey Emma, want to go shopping?

Emma: Do you even need to ask?

Jake: Umm... can I come with you? Gia, you know you're going to need someone to hold all the bags of stuff you buy.

Gia: Don't you need to save the world? 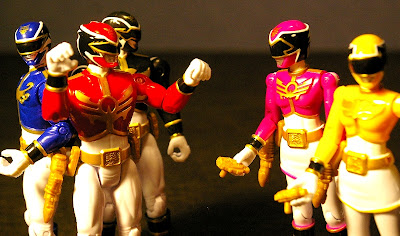 Troy: Fine, keep your morphers. We will change the requirements. Girls that look hot in and out of Ranger suits don't have to be able to do high kicks. Emma, I can't do this without you. We can't do this alone. We need you two to form the Gosei Great Megazord!

Noah: Yeah, Troy is right. We need the Phoenix and Tiger Zords.

Emma: Okay, but there is still the problem that in our skirts neither one of us can sit to pilot our Zords.

Jake: I can think of a solution to the skirt problem!

Everybody: Keep it to yourself, Jake!
Posted by Buzz Chuck at 6:12 AM