Merman was always a character from the vintage cartoon that I liked, but never thought his toy was that great. The head he actually came with looks nothing like his early mini-comic apearance and nothing like his Filmation cartoon apearance. He's not a bad figure, but I like this head sculpt better on Stinkor. I also was never a huge fan of the goofy bow at the bottom of his armor. This evil warrior was the Ocean's equivalent of Beastman. Merman could control fish and sea creatures similar to Aquaman. Merman was the only figure to come with his particular armor and sword. Very few early Masters characters had unique accessories. 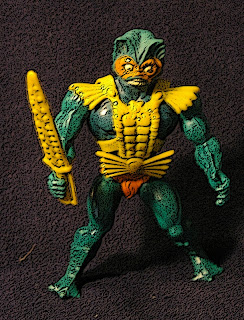 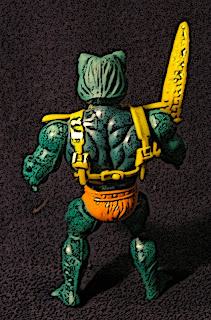 Merman's body is recycled from Skeletor and his head, as mentioned above, was used for Stinkor. I never had Merman as a kid, but I did play with him some at a neighbor's house back in the day. I picked up this complete figure at NJCC a few weeks ago. He's been swimming into trouble ever since. 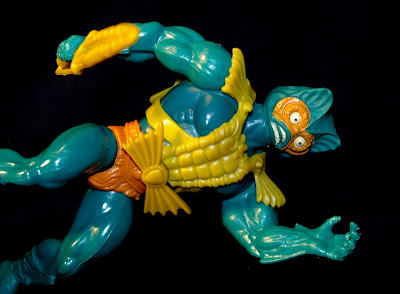 * I put a little effect on the front and back shots of Merman. Let me know what you think. I was trying out something a little different here. I like to try to make my images to be clear representations of the figures, so I don't usually tweak the pictures. I was just in the mood for something different today.
Posted by Buzz Chuck at 8:44 PM