I've previously posted about two other Professor X figures, I wonder if that's the most posts I've written about one character? Obviously once I post about every toy in my collection there will be lots of Darth Vader and Snake-Eyes posts, but I've only be doing this for a year and half. I own a ton of toys. Well, now that I think about it... I know I have posted about more than three Spider-man figures already... never mind.

Anyway, I've previously posted about the Toy Biz and X-Men Movie versions of Professor X, and the Marvel Universe figure is better than both of them. This 3 3/4" master piece is made by Hasbro. I'm a big fan of their action figures and I like the fact that this body was used for a convention exclusive Destro figure. I actually wanted to find a second Professor X so I could make a custom Destro. 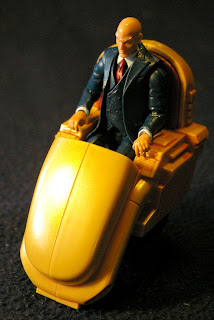 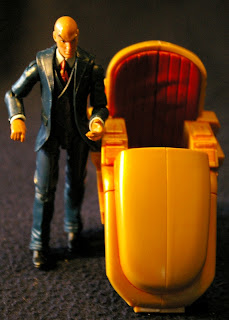 Charles Xavier is dressed in his typical blue suit can comes complete with his hover chair that he has used off an on in the comics and cartoons for many years. I think the only complaint I may have about the toy is that the proportions seem off just slightly with the hover chair. The front seems a little elongated, but it needs to be the size that it is to accommodate the action figure rider.  The head sculpt is really great. I love that he has the extra long eye brows Charles always had in the early days of the comic. The figure and chair both feature nice detailing. 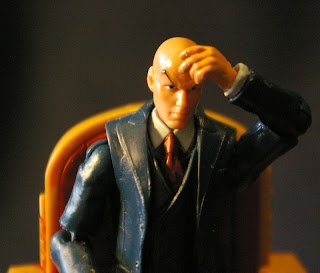 Professor X: I'm picking up a psychic disturbance. Oh no, the X-Men are in trouble. They are up against the ultimate weapon in the Universe. I must help them... Use the Force, Jean!