During the early 2000's my friends and I ran a website called ObsceneNewg.com (My YouTube Channel is still a hold over from those days). Many of the articles I wrote for Newg were toy related. I have re-posted some of those old articles on this blog since Newg no longer exists. I wrote this while I was in college after I received my GI Joe Fan Club action figure. At the time I was reading X-Entertainment a lot, and that site's influence can be seen in this post. It's kind of random. Let me know if you like this type of post. It's very different from what I usually write for AFA posts. It has a little bit of the wackiness seen is some of my videos.
___________________________________________________________
Back in the late eighties and early nineties, during the heyday of GI Joe action figures, you could send away for you very own Steel Brigade Figure. The Steel Brigade promotion allowed kids to pretend they were a GI Joe, and not as their favorite character but an all new Joe that was themselves. When you mailed away for the figure you had to fill out a form with all the important information about you as if you were a member of “America’s highly trained special mission force”. You had to include your name, birthplace, code name, military and weapon specialties and you had to pick one phrase from a short list the described the kind of person you are (loner, team player, leader).
Then 6-8 weeks later you would get the action figure of you that looked exactly like everyone else's with a standard gun and backpack (not the weapons a flamethrower and bazooka specialist like myself would carry) and a large piece of paper with you dossier on it. Your very own GI Joe file card... sort of. I had to fold mine 6 times to get it to fit in the 3x5 card box I stored the rest of my GI Joe file cards in.
Now that Hasbro has gotten serious about reviving the GI Joe action figures, they are once again offering a GI Joe Reservist figure that is actually you. He came with a gun,  and is made of a mixture of part from other figures like the Steel Brigade figure, and your dossier is actually printed to look like a GIJoe file card. This time something is different…
Hasbro took the liberty of randomly deciding my code name, my specialties, and assumed that the town in my mailing address is my birthplace for on my dossier.
Hey, Hasbro, I was not born in the town I live in now and I don’t even live in the town that is listed in my mailing address. My town only offers post office boxes. To get mail delivered to my house we have to get our mail through the post office in the town next to us. Since I gave you my name, address, phone number, birth date, and shirt size I would have been willing to tell you were I was born.
So instead of using the code name that I gave myself as a Steel Brigadier (Buzz Chuck) I have been renamed as a Reservist (Hazard Wrangler). I must have given up the flame thrower to become a communications expert, but by dumb luck they randomly let me keep my skill with bazookas.
So one day I was on guard duty and I says to myself... 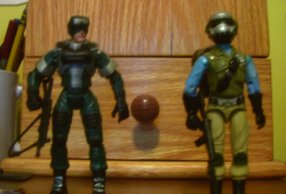 Hazard Wrangler: Hey Buzz Chuck, nice color scheme. I love the green vest over top the blue shirt.
Buzz Chuck: Can you just leave me alone? We are on guard duty together, not on Martha Stewart’s Fashion Sense. 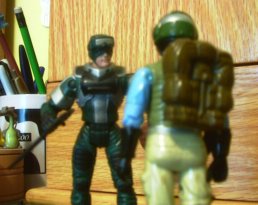 Hazard Wrangler: I also love your dorky helmet.
Buzz Chuck: Hey man, this was cool in the eighties!
Hazard Wrangler: Yeah just like your knee pads and prom gown gloves.
Buzz Chuck: I wouldn’t talk if I were you. That SCUBA suit torso goes so well with your little green snow suit. 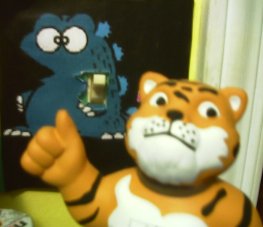 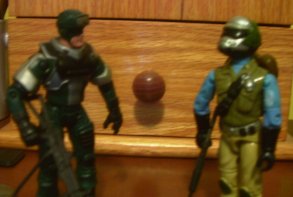 Hazard Wrangler: Oh, shut up Tony! Why don’t you go eat your frosted flakes somewhere else?
Buzz Chuck: He’s the Princeton Tiger not Tony the Tiger.
Hazard Wrangler: What do you know Buzz? He goes around say stuff like “They’re great” and “They bring out the tiger in you” all the time.
Buzz Chuck: So he uses Kellogg’s catch phrases, at least he isn’t a Disney freak. The last thing we need on the bureau is a tiger jumping all over the place singing and misspelling everything.
Hazard Wrangler: It doesn’t matter, if this gun weren’t plastic I’d shut up Tony for good!
Buzz Chuck: His name is not Tony! Do you see a red handkerchief tired around his neck? No! 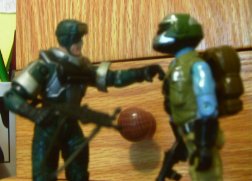 Hazard Wrangler: What I do see is a goofy looking GI Joe standing here arguing with me about something that does not matter. I don’t care about the dumb tiger…
Buzz Chuck: Um… the “smart” tiger – he’s from Princeton.
Hazard Wrangler: Shut up, I am so much a cooler toy than you. My gun has a shoulder strap and my uniform has a very classy color scheme.
Buzz Chuck: Okay, you want to talk about the little details? My gun has a bayonet and I have a back pack. Let me tell you, it’s a cool back pack. It has a spade on the back. I also came with a cool badge with my picture on it. 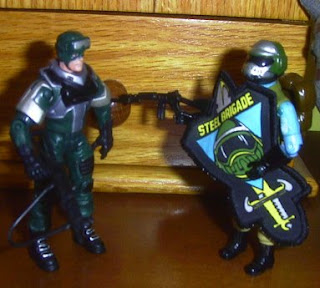 Hazard Wrangler: Oooooo! A back pack, you think that makes you special? I came with dog tags and a T-Shirt which KJ’s worn twice already. He’s had you a lot longer and still has not stitched your patch on anything.
Buzz Chuck: Well that just means that he likes your shirt more than my badge. Still, he has played with me. You’ve just been sitting here since he took you out of that padded envelope that is still lying on the floor.
Hazard Wrangler: He has too played with me!
Buzz Chuck: Putting your gun in your hand and putting you in a pose on this piece of furniture does not count as play. 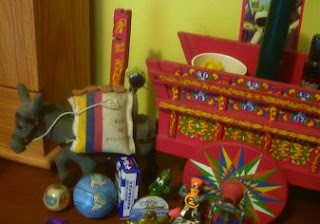 Colombian Coffee Donkey: Perhaps the important differences are in your physical construction and not in your uniforms and accessories.
Buzz Chuck: Yeah, I think the Technicolor Dream Donkey has a point.
Hazard Wrangler: Leave religion out of this.
Buzz Chuck: What are you talking about? 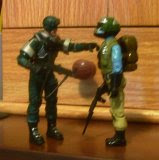 Hazard Wrangler: I’m more muscle bound and that makes me better so, ha!
Buzz Chuck: So what if you’re bulkier? You don’t have a rubber band in your belly. I can get in positions you’d never image. I can also let my arms hang at my sides. You need broader shoulders to go with your beefy arms.
Hazard Wrangler: Don’t hate me because I’m beautiful. Arnold Schwarzenegger can’t get his arms hang at his sides normally either.
Buzz Chuck: You’re just lucky that the person you got mailed to a white male. If you had been sent to a girl or someone of another ethnic background, Hasbro could have one pissed off GI Joe vs Cobra Club member. I can see the hate mail now. “Dear Hasbro, How dare you send me this figure and try to tell me this cracker is me?”
Posted by Buzz Chuck at 7:18 PM