For the 2nd wave of Kenner Ghostbuster figures each hero had a mechanical "Fight Feature" built into the figure. This figure was the 2nd Ghostbuster hero I ever owned, and my first Fight Features figure. Peter looks like he is ready to bust some ghosts in a watery area. He seem to be wearing waders and a life preserver overtop his standard Ghostbusters jumpsuit. Unfortunately instead of coming with Proton Packs the Fight Features figures came with other ghost capturing weapons. Dr. Venkman comes is equipped with a blue hook gun. 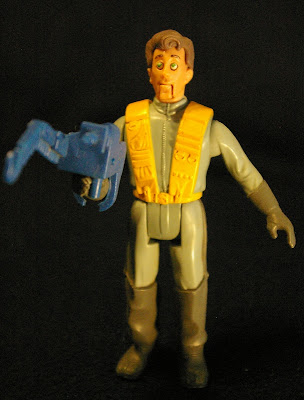 When you press Peter's arm in against his side it activates his Fright Feature. His hair pops up, his eyes bug out, and his jaw drops. Like the rest of the figures in this line, his feature makes him scream in a very cartoony fashion. One of my favorite things about the Real Ghostbusters line is that the heroes always came with a small ghost. This allows kids to have great adventures even if it's their first figure from the line. Peter came with the Gruesome Twosome Ghost. It's actually two small blue ghost whose tales are tied together. They can either fit over his shoulders or be hung from the hook on his gun. 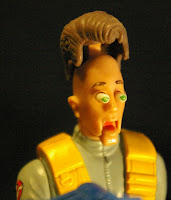 This Peter Venkman got a lot of play time when I was a kid. Driving around in Ecto 1 or sliding down the fireman's pole in the Ghostbuster's Firehouse Playset. Frequently saying lines from the movie like "I've been slimmed" and "Someone blew their nose and you want a sample of it?" 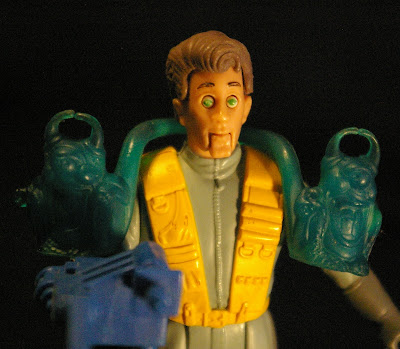