Once again, I was up early and out to door to hit a few flea markets with a couple of friends of mine. We mostly buy tools at the flea markets, but I also have my eye out for toys and comics. I always see a lot of local toy resellers out hunting for treasures at the same time. It cracks me up because when I was a kid (and teen) I used to buy a lot of stuff off these guys, now I just go hunting in the same places they do.

I picked up the DC Universe Classic Superboy figure. This is the 90's Superboy as he appeared after the Death of Superman story. He sports sunglasses and a leather jacket. The figure is pretty nice, even though he isn't my favorite version of the character. He has a little paint wear on his hair, but it's not bad. I also picked up a small baggie of gaming dice. Superboy set me back $2 and the dice were another buck. I really wanted the dice because of the brown football shaped one. I didn't have one like that before. 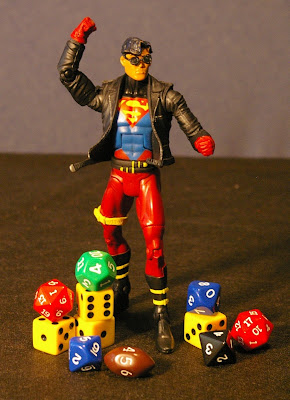 Here is the back of Superboy next to my jar of dice. I used to use these dice when I played Dungeons and Dragons in Elementary School, and then Warhammer 40,000 in Middle School and High School. Now I display my dice in a cool glass jar I bought at a craft store. Superboy has a big yellow "S Shield" on the back of his jacket. 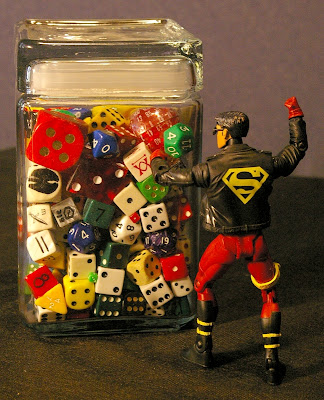