After the Masters of the Universe movie was released in the late 80's, three characters were immortalized in plastic as part of the regular Masters of the Universe toy line. Gwildor is the first of these three character to be added to my collection. I bought him over the weekend at the NJCC. Gwildor, sort of like Orko, does not follow the typical MOTU figure construction. Due to him being a shorter character he doesn't have the typical MOTU hips. Gwildor has 7 points of articulation. His head, shoulders, wrists, and feet all rotate. The figure is nicely detailed and painted. He does not feature any removable gear like many of the early MOTU figures did. 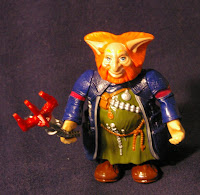 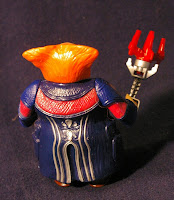 Gwildor comes with one accessory. His time travel device, the Cosmic Key, doesn't look exactly like it did in the movie. The red top can spin on the silver handle, in the film the key would spin and make musical sounds when it was activated. 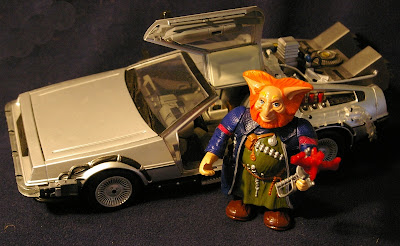 Gwildor decided to go back to the drawing board after the Cosmic Key turned out to not be very dependable. One day he slipped off the toilet and hit his head on the sink and when he awoke he invented the Flux Cosmic Capacitor.
Posted by Buzz Chuck at 10:07 AM