Panda Kahn is another wacky character from the original Ninja Turtles toy line. Unlike most of the toys, he was not created for the Turtles. Panda Kahn had his own comic book and like Usagi Yojimbo he was featured in comic cross over material because of his similarities with the Turtles. He is a large Panda wearing samurai armor. Kahn was not feature in the the original cartoon show, but he probably would have been very cool. 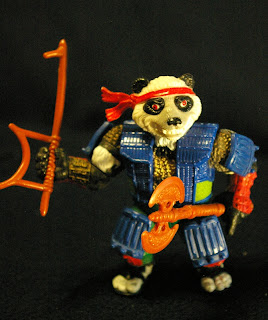 Panda Kahn came with four weapons (only two are pictured). He came with the Dragon's Claw Sword, a Battle Axe, a Fusion Blaster (small gun), and a Gou Hook. All his weapons are molded in the standard TMNT brown. His Battle Axe is my favorite of his four weapons. The little gun always seemed odd to me, and I don't really know what you use a Gou Hook for anyway. I pretended it was a training weapon. I liked to make the toys of Panda Kahn, Usagi Yojimbo, and Sewer Samurai Leonard go off on their own adventures. 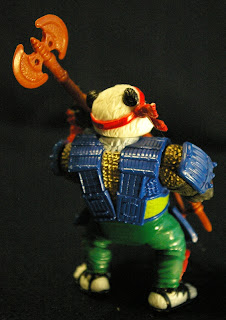 When I thinned out my toy collection in Middle School Panda Kahn was one of the few TMNT figures to stay in the collection. I'm glad I hung on to him. Kind of wish I had kept all the stuff I parted with then, but I was focusing on my Vintage Star Wars and GI Joe collection at the time.