Toys that go Bump in the Night!

At 4:50 AM, I awoke to the sound of a loud crash. In my startled state I thought for sure the display cabinet I recently hung in my toy room fell. Oh, man... it probably crushed my 2nd Flagg and messed up all the toy inside. I had to go check on the carnage. I turned on the light, and thankfully it was still on the wall. So, now I had to think what else could have fallen. 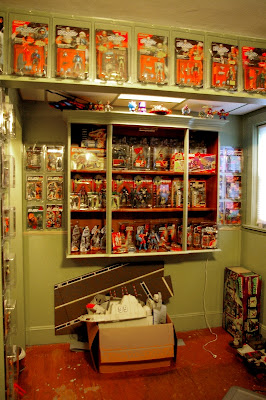 I walked through the kitchen and turned on the light to the dinning room. I found the problem. It looks like my Marvel Universe Sentinel decided to commit suicide. The Sentinel took a nose dive off the top shelf of the hutch in my dinning room. The weight of the figure actually pushed the hutch doors open and he fell on the floor knocking lots of other toys off that shelf. Luckily the other shelves survived unscathed. 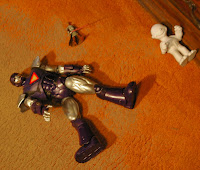 Here's the hutch as I found it. The doors were wide open and lot of figures laying all over the place on the top shelf. 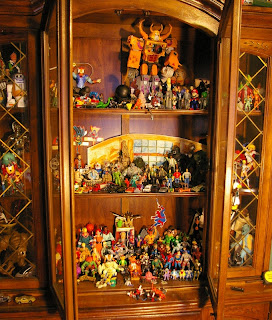 A few figures from the top shelf landed on the bottom shelf, but they didn't really knock anything over. 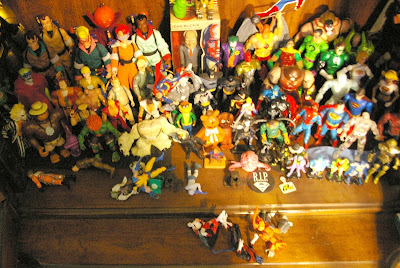 Well, since I mentioned the new cabinet in the Toy Room, and since I have been meaning to do another Toy Room Preview. I still don't have the room carpeted, so it's not really done, and that's why this is still a preview. The new display case is the top portion of a hutch that I mounted to the wall. I plan to fill it with my GI Joes once I finish painting the doors and hang them back on the case. Right now I have my DC Direct Elseworlds and Knightfall figures in there plus a few other boxed toys. 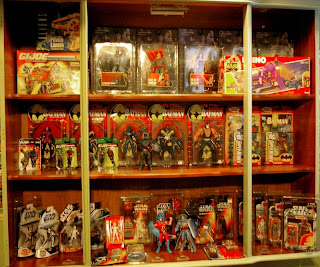 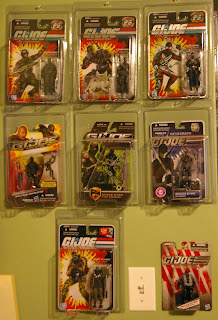 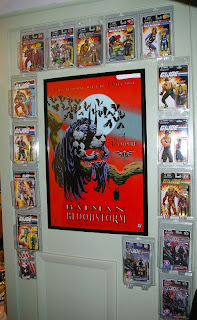 Some of my carded figures on display in Zoloworld cases. On the left is my Snake-Eyes collection (25th Anniversary and newer). On the right are other carded Joes along with my Batman: Bloodstorm poster. 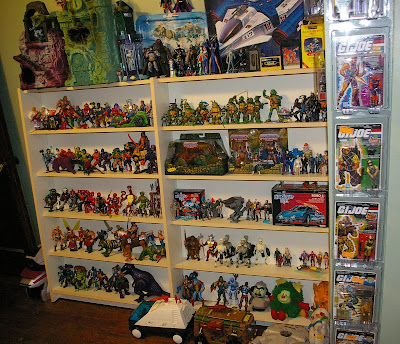 Shelves with my vintage Masters of the Universe, 200x MOTU, Ninja Turtles, Robocop, Realm of the Underworld and even some stuffed Rainbow Bright toys. Along the end of the next wall you can see a bunch of my carded vintage GI Joe figures.

I previously posted pictures of the shelves I built in the closet. It's still kind of the same, but I do have a few figures and vehicles displayed with the play sets.


The Mobile Command Center, The Triple T, Sky Hawk, and Mean Dog are all on the top shelf with Jinx, Sgt. Slaughter, Snake Eyes.


The next shelf shows off the 1983 GI Joe HQ. The Dragonfly helicopter is on the helipad. I need to get a VAMP and MOBAT out of the basement to put in the garages. For some reason the Star Wars Speeder Bike and Taun Taun are also on the shelf.


The next shelf has the Tactical Battle Platform. It's flanked by the Whale Hovercraft, tMoray Hydrofoil, the Water Moccasin, and the Devil Fish. Admiral Keel Haul and Shipwreck are on the deck of the TBP.


The bottom shelf, aka the floor, is were I keep the Defiant Space Shuttle Complex. The He-Man New Adventures Star Ship Eternia is housed there as well.