Today's post is about the Dino Riders Pachycephalosaurus. This brown and black dinosaur came out in 1988. The dino is very nicely sculpted and painted as all the dinosaurs in the line were. The Pachycephalosaurus is one of those thick skulled dinosaurs that would ram their head into other like dinosaurs. Similarly to what rams do today. 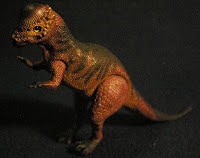 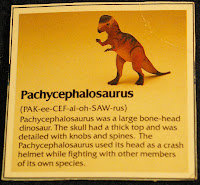 The Pachycephalosaurus came with a seat and battering ram unit that fit on it's back. The human rider Tagg was also included with the dino. Unfortunately since I moved (3+ years ago) I can't find were my MASK and Dino Riders figures are so I can't photograph Tagg. I bought the Pachycephalosaurus new in package at a yard sale a number of years after the line was out of stores. I opened it up and it re-sparked my interest with the line for a little while. I never had very many of the Dino Riders toys, but I enjoyed the ones I had. My buddy Derek had all the big ones like the T-Rex and I loved playing with them at his house. 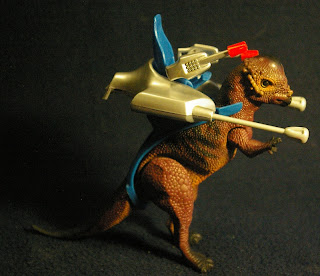