Glyos is both a toy line and a system for creating modular articulation points for action figures. Onell Design created the Glyos System Series, a line of action figures what feature small pin and socket joints that snap together, but can come back apart to be rearranged. Their line of toys can all be mixed and matched allowing people to create their own unique color schemes or figures. Since the creation of the Glyos pin and socket system, it has been integrated into other toy lines created by other toy design companies. The cool thing about this it that all the parts for all the lines that use the Glyos system are interchangeable. 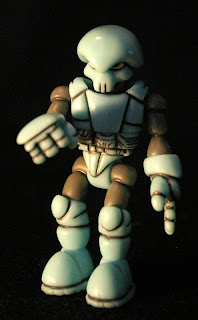 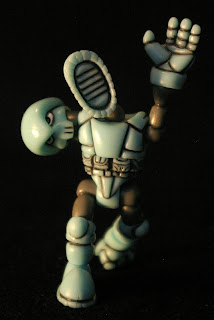 Last weekend while at NJCC, I meet John Kent from Toyfinity. His company has recently acquired the rights to some 80's toy lines and are working to bring these loved but forgotten toys back. Currently they are selling the eggs that Manglor toys came in back in the 80's. They are also selling new Mordles, which were little accessories to the Rocks and Bugs and Things toy line. Their next project is bringing back Robo Force. John also told me that they are working on new sculpts for the Mordles and they will by Glyos compatible. 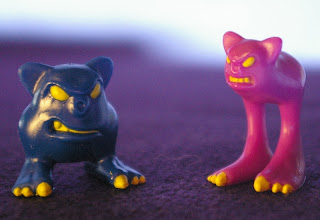 Mordles come in a variety of sculpts and colors

I'm a child of the 80's but until recently I was not familiar with any of these toy lines. I have seen Robo Force figures at yard sales before and vaguely remember then from my childhood, but that was about it. A while back I bought a DVD of 1001 Classic TV Commercials at Target and it contained ads for Manglors and some of these weird toys that have showed up in other places like Toy Hunters and Topless Robot. I learned about Rocks and Bugs and Things from Pixel Dan's review of the new ToyFinity Mordles. They remind me of Monster in My Pockets, which my best friend Derek and I played with all the time as kid. They also remind me of Squigs from the table top battle game Warhammer 40,000.

At the ToyFinity booth John was also showing off toys from other companies that use the Glyos system. All these independent toy companies are working together with this shared pin and socket system to allow collectors to customize and trade parts around between these different toys. The Four Horsemen who sculpt the MOTU Classics figures have been releasing Outer Space Men toys for a while now that use the Glyos system. They are also using the Glyos system in their revival of the Power Lords toy line. Another company that is using Glyos (and the company that made me aware of the system) is Spy Monkey Creations. Pixel Dan has done reviews of the cool modular weapons Spy Monkey has been making for 6" action figures. These weapons sets are clearly designed to work perfectly with the Masters of the Universe Classics figures. Then a short time later they released their own figures called the Weaponeers of Monkaa. 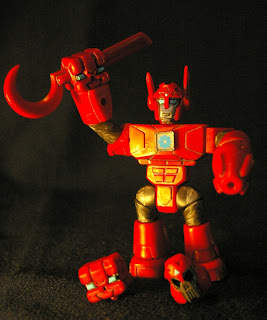 My buddy John (and fellow blogger) sent me a Weaponeer figure a while ago when he was blogging from the Cosmic Arc. These figures are totally modular. The fists for the Weaponeers are also heads. Even the arm cannon has a face on it and can be used as a head to create a different character. Yesterday as I was starting to think about writing this post, a package came from John. We had worked out a trade (for something awesome that will get it's own post some day) and John included a bunch of extra goodies in the box. One of them was a Glyos figure. Check his blog out at Clawful Punch! Now I can post a picture of a Glyos figure with with a mix and match paint scheme. 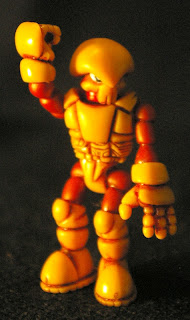 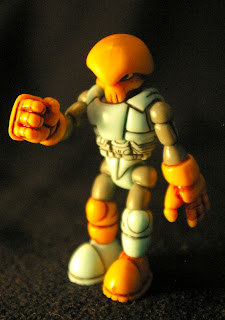 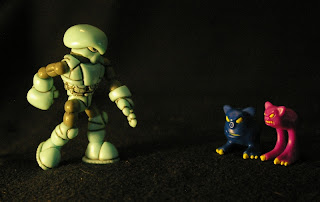 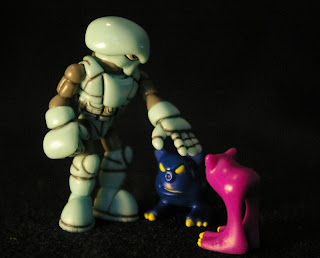 Pheyden: What a strange manner of creature you guys are. You seem nice enough.
Mordle: purrrr purrrrr!
Pheyden: My sensors indicate that you are called "Mordles".
Mordle: grup...yup. 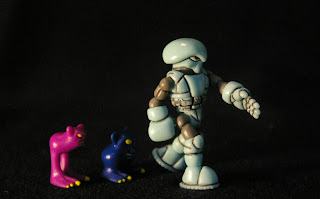 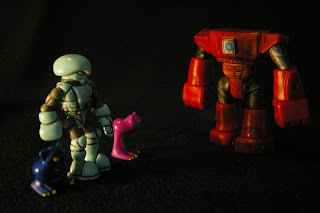 Pheyden: Wow, check out that armor. It's very impressive. Clearly there is life on this planet more intelligent than you guys.
Mordle: urg!
Pheyden: Oh no offense. sorry. 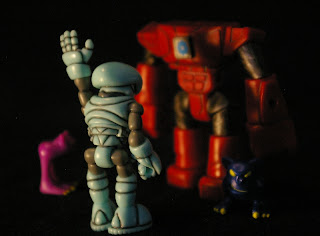 Pheyden: Hello! Is anyone around? 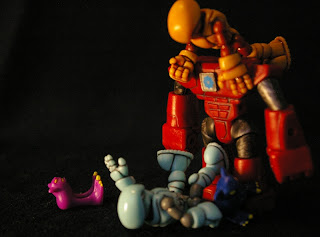 Pheyden: Ha! caught you! Though you could steal my mechanical suit while no one was looking?
Pheyden: whaaaa!?!
Mordle: Squeeeee!
Mordle: Rrrrggggu? 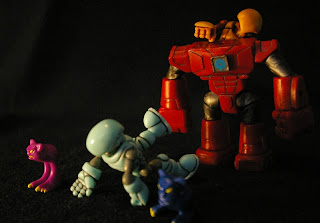 Pheyden: As soon as I get my suit on I'll teach you not to steal.
Pheyden: No, no, I think we have a misunderstanding. 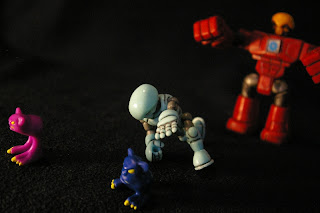 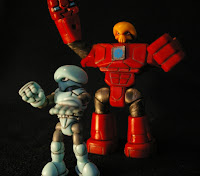 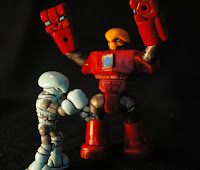 Pheyden: I'll pulverize you!
Pheyden: Listen buddy, I didn't do anything to you. 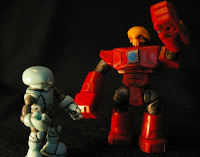 Pheyden: Oh, is that how it's going to be? You really are asking for a beating.
Pheyden: what? I hit you in self defense. 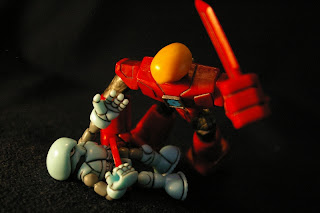 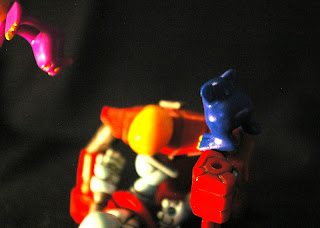 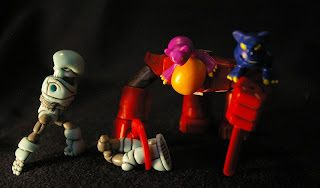 Pheyden: Thanks guys! I'm going to miss those legs, but it's a small price to pay. 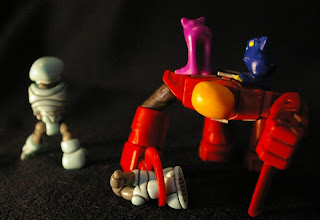 Pheyden: Get off of me you fowl beast!
Pheyden: Let's go guys!
Pheyden: Argg! my weapon is stuck in the ground. I can't free it. 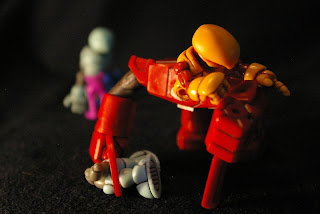 Pheyden: What a mess. I'll get you for this! 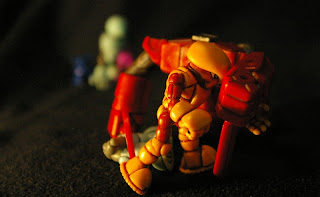 Pheyden: Oh come on. He's getting away! Work with me here armor.