When I was at the New Jersey Collector's Convention (NJCC) a few weekends ago, I was lucky enough to win a cool action figure door prize. I won a Joe Con exclusive figure from 2007. This is a 25th Anniversary Destro painted up as a tribute to the rare Pimp Daddy Destro figure (as he was quickly named by fans). If you are not familiar with the original PDD, it goes back to when Hasbro was bringing GI Joe out of hiatus in 1997. They were releasing 3 packs of figures and a few vehicles as Toys R Us exclusives. Many of the figures had interesting paint schemes that used cool fades and other techniques not really seen on Joes before that time. Someone approved a paint scheme for Destro that featured gold, maroon, and leopard print. Shortly after production started, Hasbro decided it was a bad move and made a change in the figure. This resulted in very limited quantities of the original figures. Ten years later the GI Joe collectors club released this tribute figure. 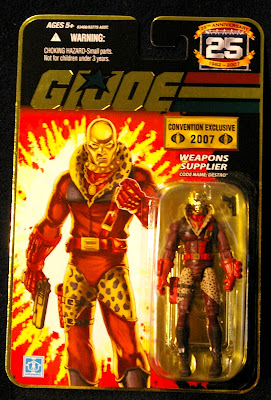