Alpha 5 is a humanoid robot with a high strung personality from the original Mighty Morphin Power Rangers. He worked with Zordon to find "Teenagers with attitude" to form the Rangers. He was often responsible for teleporting the teens to the Command Center, and then into battle after they morphed. This figure came packaged exclusively with the Power Dome (Command Center) play set. I was happy ti pick him up for a few bucks at NJCC. I'm a big fan of the original MMPR show, but never really had the toys. With this being the 20th Anniversary of that show, and the new series Megaforce being on tv, I've been have fun reminiscing about the original series and toys. The Power Dome play set that included this figure is based on the Command Center from the TV show, but was not very accurate. 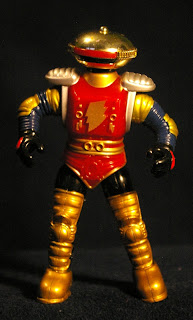 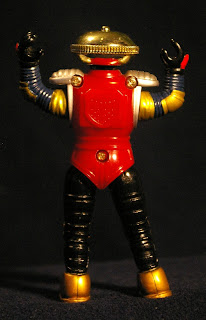 Alpha has a five points of articulation. I think it's worth noting that his hips are more like the vintage GI Joe figures than vintage Star Wars. As a kid I used to love playing Power Rangers with my younger cousins because they had tons of the toys. I remember taking a C3P-O toy to their house to use as Alpha and drawing a blue face on a toilet paper roll to represent Zordon. 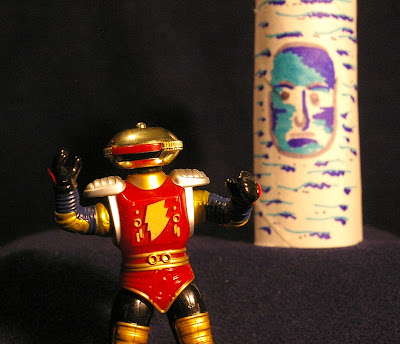 Alpha is currently being displayed on my California Job Case. These trays that make great nick-knack shelves were originally used to store metal type for old fashioned printing presses. You can see lot of other Mini-figs display here including my Mordles, Glyos, DC Squats, Loyal Subjects GI Joes, Kre-o Joes and Transformers, Battle Beasts, and Mega Blocks Power Rangers.  I bought this tray at a yard  sale and hung it on the wall during the summer, and it's filling up quickly. 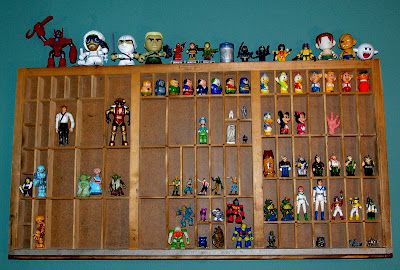